MCVA trifecta course is working with Indie bands from the Bronx 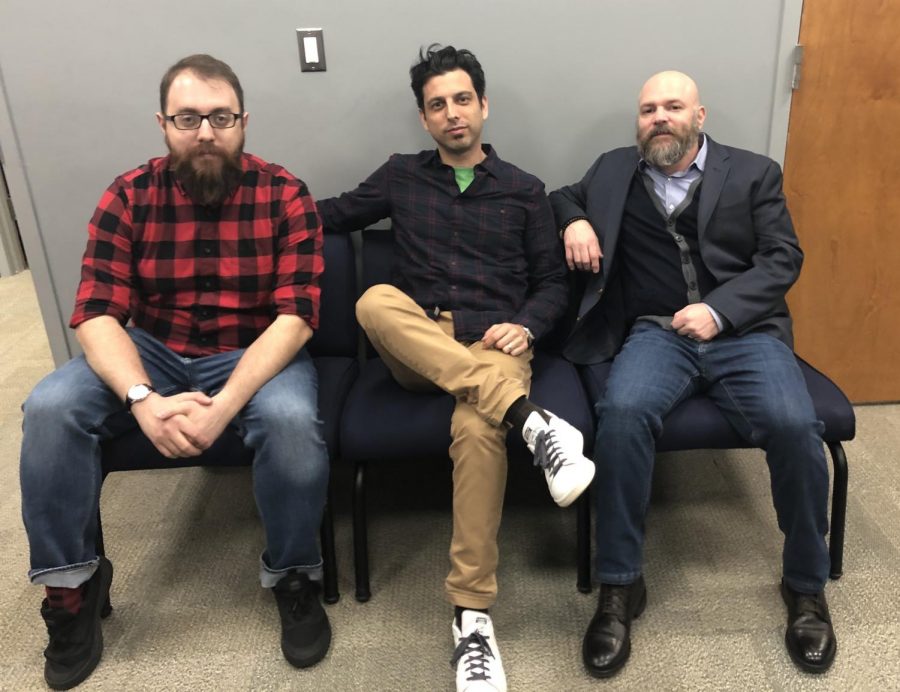 From left: Pace MCVA professors Lou Guarneri, David, Freeman, and Paul Ziek, whse classes are working together this semester in a trifecta that will help promote punk rock bands from the Bronx.

A new trifecta of classes at Pace University’s Media, Communications, and Visual Arts Department will be working together this semester to help promote four punk rock bands from the Bronx.

The three classes that are working together are: Cinematography II with Professor Lou Guarneri, Writing for Print Media with Professor David Freeman and Public Relations Research with Dr. Paul Ziek.

The cinematography class will film music videos for the bands, all of which will be filmed on campus, the print media class will construct a magazine about them and the Bronx underground music scene as a whole, and the P.R. Research class will do research on each of the groups. All three of these classes are held simultaneously, on Wednesday evenings from 6:10 p.m. to 9 p.m.

Guarneri initially came up with the idea to work with these bands, partly because some of his students had told him that they do not get enough client work, and also because, being a Bronx native, he wanted to give back in some way to the music scene there.

“I thought that [working with these bands] would be a cool way to give [my cinematography students] an experience working with a client trying to achieve someone else’s vision, and simultaneously I can give back to the music scene that really means a ton to me,” he said.

According to Dr. Ziek, these three classes working together just happened organically over time.

“Once Guarneri said that he was going to film these music videos, I said that clients are great for me, and it was just natural, given Freeman’s history of being a musician,” Dr. Ziek said. “So that’s how [the trifecta] shaped up.”

Even though the MCVA department conducted a few trifecta classes before, with the Corporate Video, Breaking News, and P.R. Case Studies trifecta being one of the most popular, this is the first time that these three classes will be working together.

According to Guarneri, spending a large amount of money to create music videos is not an available option for a lot of these bands, so Pace is providing opportunities to them that they most likely would not get otherwise.

“Indie bands don’t often get to save a thousand or two thousand bucks just by coming to Pace University and working with our students here,” he said.

Freeman, who is an independent musician himself, agrees with Guarneri about the unique opportunity that these bands have, thanks to Pace.

“What a gift to have a full production crew offer these bands time, equipment, and post-production, that they can post online to their socials to their fanbase, increase their fanbase, and use those materials to get future work and future gigs for their group,” he said.

Even though the semester just began, all three professors have received positive feedback from both their students and faculty within the MCVA department, and some students have even voiced disappointment that they have taken these classes in previous semesters and not this one. This trifecta has led to many other professors within the department wanting to partner with Guarneri and his class in future semesters.