Sophomores’ look to experience the beauty of Spring

We've been here before, but we left early. Now that we're back, things are still new to us. 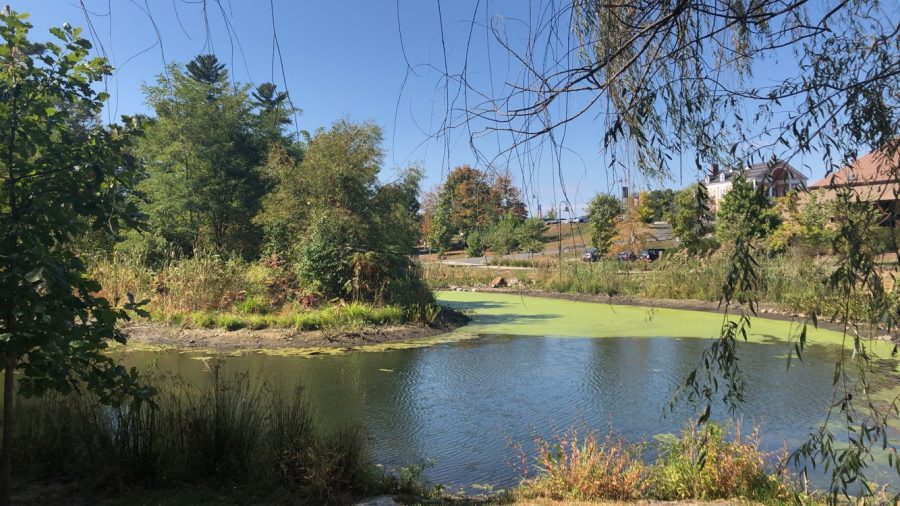 Last year COVID-19 forced students to evacuate campus prior to the bloom of Spring.

However, I do not know if I can really, fully consider this my “second” spring semester. Assuming that all goes well, this will be my first time living on campus in April. My first time watching the flowers bloom and grass fade back to green at Pace. My first time moving out of my dorm in May after classes have wrapped up for the year. Because this year has been anything but “usual,” so I have not done any of those things before.

The pandemic cut the Class of 2023’s introductory year short. We came to campus last January with plans, hopes, and expectations that never panned out.

Last year, accounting major Anastasia Bolotowsky hoped to make study abroad plans, get an on-campus job as a tutor, and a summer job as a camp counselor.

“I also had a lot of fun courses that I was involved in,” Bolotowsky says. “I was taking a photography course, and I was excited because at the end we were going to present our work as an exhibit in the library, like an art show. I thought that would be fun… I was looking forward to making more friends, and really getting my feet in the ground as a university student.”

Applied psychology and human relations major Ashley Schlemmer was looking forward to on-campus events – events that did not come with capacity restrictions or social distance measures.

“I remember coming in, I was definitely excited for the spring carnival and all of those other traditions that usually take place in the spring,” Schlemmer says. “I was starting to meet upperclassmen who were filling me in on things like that. I was thinking ‘we get to do this now that it’s our first spring semester’.”

I had big plans for last semester too. I had a lot of fun classes, including Writing for Print Media, which had lots of hands-on elements. I had just been elected Film Club secretary, and I was looking forward to making videos with everyone. Book Club and Career Services had planned a trip to visit Penguin Random House, and as an aspiring novelist, that was an amazing opportunity for me. I wanted to spend more time with my friends and have more classic college experiences. I hoped to grow more as a person as a result.

(Oddly enough, my first article for The Chronicle last semester was about COVID, before we knew what it would become. Click here to read the article if you want to laugh at how little we knew back then.)

Talk of the virus started small in January, but by March, it hung over campus like a heavy fog. I remember sitting on the back patio of Kessel doing homework, and every conversation within earshot was about COVID-19, cases in the area, and whether or not we would have to shut down. And the next day, we did.

It was cloudy and cool, but not cold. I was walking to breakfast when I got a GroupMe message in the Book Club chat. A member’s professor had told the class that the university would be emailing students later in the day to make an official announcement about shutting down campus for two weeks. I shared the word with my other friends, and we got the email a few hours later.

Bolotowsky first heard rumors of a shutdown in her microeconomics class that morning. Her professor agreed that Pace was on its way to some sort of shutdown in response to the virus. She got the email later that day, during her computer science course. She had an evening class that night, and the professor still made them go, but only half the class showed up.

Schlemmer was in the Honors Lounge in Kessel when she got the email. She and her friends went back to their rooms, packed up their things, and had one last fun night together before their “extended spring break.” Deep down, they knew that they would not be back.

Bolotowsky on the other hand was more caught off guard when she found out that she would not get to spend the rest of her spring semester on campus.

“When we first shutdown, I thought, hey, it sucks, but it’s not too bad,” Bolotowsky says. “I was happy for the extra time off, and I thought I’d get to go back by April. When I found out that we weren’t going back, I felt crushed.”

Classes were different after that. My discussion-based class turned into a discussion post-based class, which had its pros and cons. Pro: I sound way smarter when I write my thoughts down than I do when I speak them out loud. Con: Writing out all my responses is far more time-consuming.

Bolotowsky feels that both students and teachers lost a lot of motivation when classes went virtual.

“I was checking the clock every five minutes just to see when class would end,” Bolotowsky says. “I didn’t feel accomplished. I was just happy it was over.”

Schlemmer says that she missed the in-class interactions that she lost out on when certain classes went asynchronous.

“It was kind of upsetting because we had those experiences in the classroom with them, and it suddenly turns into asynchronous work. It was a complete 180 from what we were doing,” Schlemmer says. “I still managed to do well because I have a good home environment with a space to myself to get all my stuff done. But I see how for others who aren’t as fortunate to have something like that it could have been really difficult.”

Schlemmer still had a fair amount of fun while we were on campus last spring. She got to go to a hockey game with the Honors College, visit the Wolf Conservation Center with Nature Club, and attend a concert in the city with friends. Still, she wishes she could have had more of that.

“Yes, we got a good first semester,” Schlemmer says, “but once you get your feet in the water, you want to be able to continue to do that and grow as individuals for the second semester.”

I agree. I got a lot out of my fall semester and the first half of last spring (which honestly feels like an entirely different year from the second half). I attended events and got involved on campus. I made and spent time with friends and got a lot of great memories and lessons, in and out of the classroom. And in a strange, unexpected way, I feel like I did benefit from the second, post-shut-down part of the year.

Still, the fact that COVID cut last spring short gives this spring a surreal atmosphere. As of now, I am somewhere familiar. February at Pace. I’ve done this before. But in mid-March, things will be entirely new to me. It’s like someone paused a movie mid-way through, and now I’m re-watching the first half, but the second half is still a mystery to me.

Schlemmer also feels the odd aura of this semester.

“It’s weird because as much as I’ve been here, I still feel like a first-year student again in a sense,” Schlemmer says. “I’m still learning everything as a new student would… As an honors mentor, I wish I could help out the first-year students with the spring semester, but unfortunately, I’m going through it at the same time as they are.”

Schlemmer still has hopes for the semester though. She is happy that professors and students are getting a better handle on the online class format with more opportunities for interaction. She also appreciates Pace’s efforts to host safe events, like the ice skating and bonfire event that took place on January 30. She hopes to get involved more and keep in touch with people.

“I took it for granted, being able to see people,” Schlemmer says. “Now that we’re back, I really want to make the most of my experiences in the safest way possible.”

Bolotowsky also looks forward to this semester. She did end up getting the on-campus tutor job she wanted, and she is excited to start work. Online classes have offered her benefits as well.

“I’ve taken some city campus courses,” Bolotowsky says. “I don’t have to worry about the cost or timing of a commute. I can maximize the potential that I have at Pace.”

She also looks forward to seeing the change of seasons at Pace come March.

“I never really got to see the campus in the spring, the transition from winter to spring. I know it’s cheesy, but it’s beautiful.”

Bolotowsky, Schlemmer, and I are all optimistic about our ability to make it all the way through to the end this time, especially considering that we survived the fall.

I cannot say for sure what this semester will bring. I know it will not be exactly how I envisioned my college experience. I will still have to work within the rules designed to promote safety and limit exposure risks. But whatever this semester brings, I’m prepared to make the most of it. And I’m looking forward to what will (hopefully) be my first full spring semester here at Pace University.