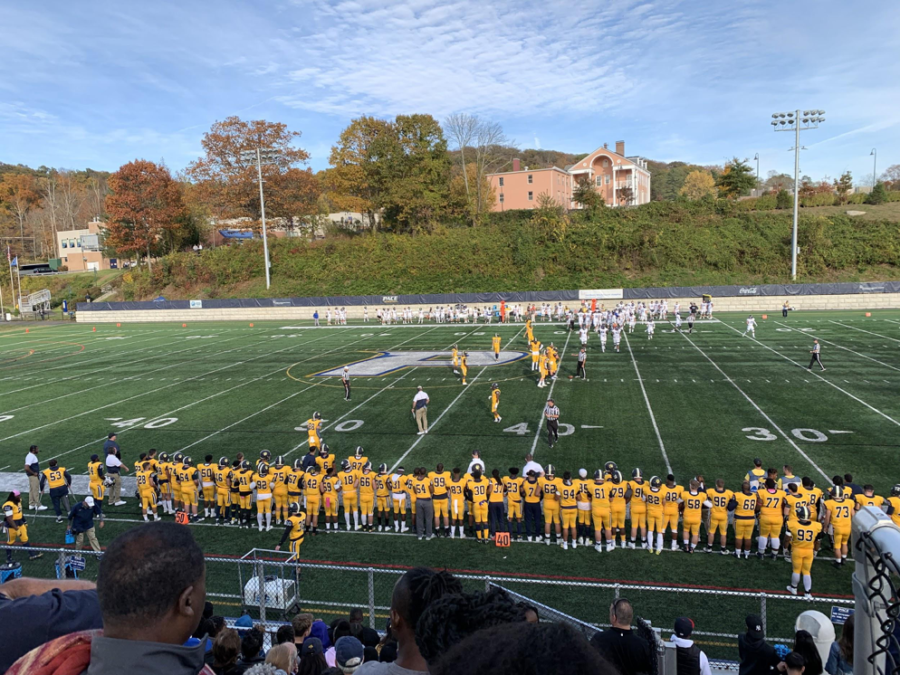 The Football line sporting their yellow jersey's at the homecoming game.

With Pace (4-3) in the 2019 Northeast-10 Conference and Bentley (3-4), their conference standings football standings left a great game to follow. The Setters may have lost the game, but the spirit of the Setters’ and the entire Pace community made the game a must-see.

Pace students and alumni began the homecoming celebrations by tailgating just outside the stadium in various parking lots. The excitement, fun and school spirit set the atmosphere and tone before the game began.

Both teams came out strong, but Bentley took an early lead of 20-7. The Setters’ defense never refused to step down. After half time, the game escalated and both teams tied with a score of 20-20. During this tense time, Pace players linked arms to give support to their fellow players on the field. After the PAT, Pace was up 21-20, but after a final Bentley touchdown, Bentley took home the win 28-21. 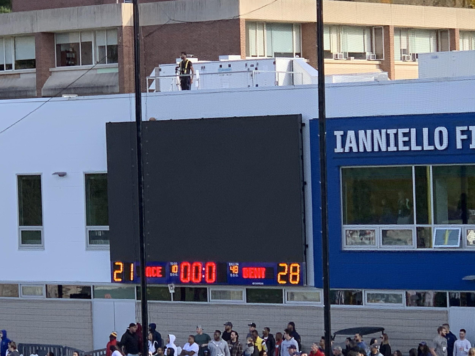 “Young teens are resilient, they bounce back,” said head coach Andy Rondeau after the game. “[We will be] checking everyone’s health and taking a look at the video to see what were the good things and what were the things that we can get better at.”

Unfortunately, team captain Joe Mendes injured his problematic shoulder and had to support his team from the sidelines.

“[He showed] extreme leadership and selflessness being in such horrible pain,” Rondeau said. “I think we are a responsive team. I think we have a lot of camaraderie. We believe in the term family and we do have a second family mentality.”

Player James Day talked about things that stuck out to him.

“The offensive line as a unit led the way,” said Day. “Quarterback Carlton helped set us up. On the defensive end, Joe Mendes number 9, a great team leader of ours, unfortunately got injured. Number 34 Harrison, another great captain and a huge leader is our secondary. Jaylan Martinez in the middle also showed great leadership throughout the game.”

Day believes that they are going “to improve by figuring out what they need to change and focus more, that defense could’ve done more but they will step it up for the next game.”

‘Step it up’ is exactly what the Setter’s did at their next game, Saturday November 2. The team celebrated their senior day before the game began by announcing their academic and athletic achievements throughout their years at Pace University.

The team faced American International College (AIC) with a 35-25 win. The teams were tied at the end of the first quarter, but Pace entered the second half with a seven-point lead. Pace proceeded to score one touchdown per quarter in the second half, and this is where AIC gained most of their points.

However, Pace put up a good fight and did not let AIC surpass their ending score.