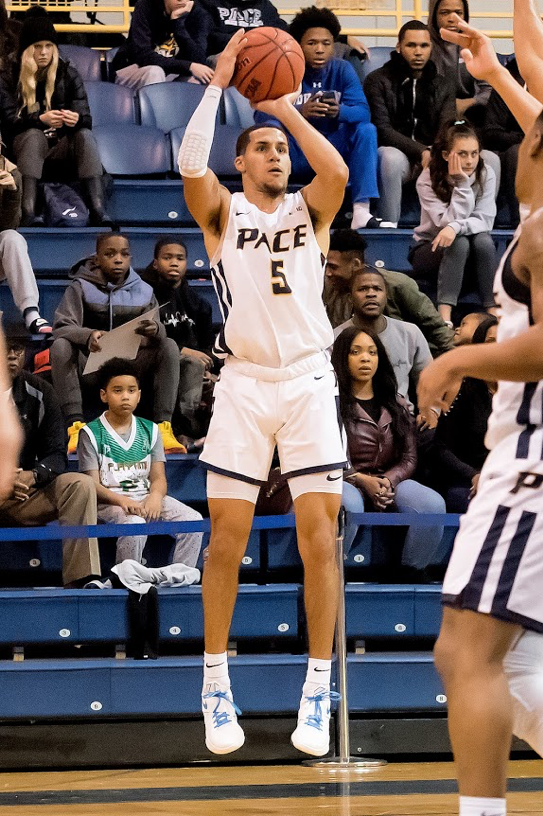 Tyrone Cohen Jr. was featured on SportsCenter for his game-winning half-court shot.

While many students spent their winter breaks away from campus, Pace basketball players had a bigger priority: Keeping their winning records.

Brianna Wong had 5 assists and 6 steals while Jackie DelliSanti scored 36 points in the team’s 56-point victory against Caldwell. Lauren Schetter and Naya Rivera both grabbed 9 rebounds to contribute to DelliSanti’s 10 in that same game. At Southern Connecticut State University, DelliSanti and Schetter racked up 38 points, both scoring 19. The duo also helped clean the glass by collecting 18 combined rebounds.

These kinds of performances are what helped the women’s basketball team achieve 6 victories over break, adding to their impressive record (16-6).

The men’s basketball team struggled more than their counterparts over the break. Despite the impressive statistic lines, the men earned 3 victories against Southern New Hampshire University (80-76), Bentley University (76-66) and Stonehill College (61-60).

Luckily, the men played with pride, even in the games that did not turn out in their favor. Five players scored double-digit points Versus Saint Anselm College. The men played well and gave the ball to the open man. Austin Gilbertson (20), Brandon Jacobs (14), Peyton Wejnert (14), Tyrone Cohen Jr. (14) and Bryan Powell (11) would combine for 73 points. Powell, despite being a first-year athlete, grabbed 12 rebounds that game.

The men’s team welcomed back the rest of the student body with a bang on January 29th against Franklin Pierce University. Tied at 72 with just seconds left, Bryan Powell caught a missed layup off the glass. He took a dribble up court and dished it to Tyrone Cohen Jr., who then shot, only feet from the half-court line, and drilled it at the buzzer to seal the win for the Setters.

The gym erupted as Cohen Jr.’s teammates quickly rushed the court to celebrate the spectacular shot. This game-winner was even seen on SportsCenter’s Top 10 Plays, coming in at number 2.

Hopefully, both programs will use this to kickstart the remaining games of the season since students are back on campus and the holiday break is over.