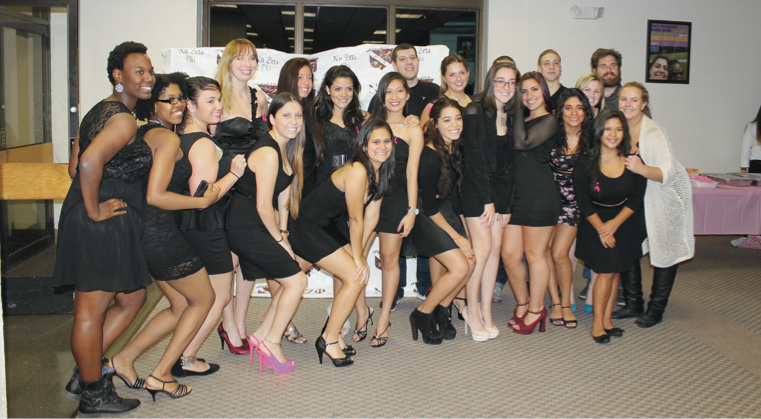 Hosted in Gottesman, the chapter’s intent to raise awareness and support for breast cancer research was met with unexpected results. Instead of boring the crowd with information, an unavoidable sense of positivity encased everyone involved.

Participants dolled-up appropriately in pink, ranged from professional to downright absurd. Feeding off the lively and supportive audience, the struts of each contestant provided the audience with a hearty laugh. Whether some were there for the cause, the festivities, or the food, nobody walked away disappointed.

Executing such a complicated event takes immense precision. For the sisters of Nu Zeta Phi, their grasp of initiative and individual responsibility was proudly reflected in the overall success of the event. Each and every girl had a role to play to ensure the show could move smoothly. From serving food to announcing winners, every conceivable aspect that could go wrong did not at all.

Behind the scenes, not everything proceeded without a fault. Cindy Delgado, a senior international business management major, took on the challenge of organizing Nu Zeta’s spectacle. “This is something we were very nervous about,” Delgado said.

With a full year off-campus, the amount of available resources was strictly limited. Consequently, being unable to fundraise and generate a substantial, economic framework proved to be one of their biggest hurdles.

To a casual looker, one wouldn’t think twice about the limited supplies. Gottesman had transformed from a barren conference room into a beautifully orchestrated stage. The sporadically patterned pink balloons served to pleasingly set an atmosphere as well as reinforce the underlying cause. Undoubtedly, no one would’ve guessed that most of what took place came “out-of- pocket,” as Delgado put it.

Despite all complications, Delgado proudly affirmed that the results “exceeded all expectations.” Although this is the first time Nu Zeta has hosted a fashion show, it may not necessarily be the last.

“It’s something that we want to do every year,” Delgado said.

With a promising turnout against all obstacles, the Pace community showed a strong support for Nu Zeta. It was a rare night of general positivity that is always welcomed among the student body.