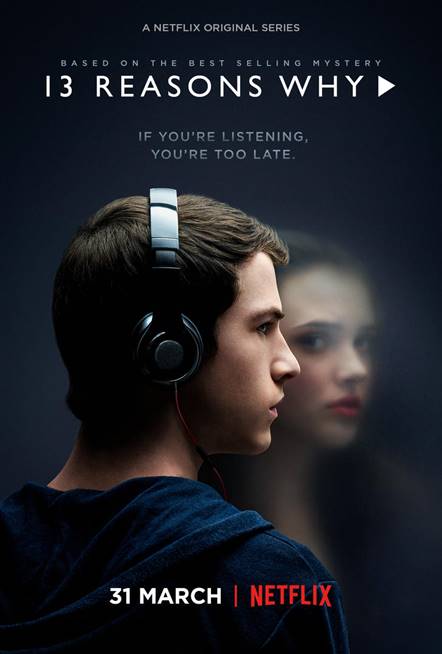 On Friday, March 31, Netflix premiered their new show 13 Reasons Why, which is based off the book written by Jay Asher. After years of rumored movie deals with Selena Gomez starring as the main character, it was announced that Gomez would actually be playing the role of executive producer for the series with Netflix. The release comes following the 10 year anniversary of the book that sparked conversations about suicide and bullying nationwide.

The story is portrayed in a butterfly effect view following Hannah Baker’s suicide, starting with the picture of a grieving high school student body complete with locker shrines, sad face selfies and “recognizing the signs” lectures from teachers. Clay Jensen, played by Dylan Minnette, comes home from school to find a package waiting for him on his porch, inside he finds a map of the town with stars over some locations and seven cassette tapes.

After listening to the first tape, Clay realizes that Hannah, played by Katherine Langford, recorded a series of tapes narrating the thirteen reasons why she decided to take her own life. The tapes set into motion a chain-letter system that was to move through each person Hannah deemed responsible for her death, one by one. In the tapes, Hannah makes it very clear that if the chain was to stop or if someone didn’t listen to all thirteen tapes, there was a secret second set of tapes that was going to be released in a more public fashion by a mysterious person.

While listening to the tapes, Clay gets freaked out by the things that were done to Hannah and begins asking other people in the chain questions about why they did what they did to her. In the beginning, the answers were the same “Don’t believe everything you hear”, “Hannah was a liar”, “Why do you care so much?”, but the longer it took Clay to get through the tapes the more paranoid the rest of the group got that he would try to hand them over to a parent or the police.

The series shows both Hannah’s version of past events and Clay’s current journey through her story, which you can decipher through visual differences. Hannah’s version there’s a warm tone to the scenes, where Clay’s version has a blueish tone to it, portraying it as a darker time.

The tapes recount a sort of snowballing series of experiences ranging from somewhat harmless high school cruelty to bullying and slut shaming to sexual assault (of both, Hannah and her former friend, Jessica). In the 10 years since the book’s original release, it feels as though the story is relevant more now than ever. High school has always been recognized as a universally hated period in life, but the things that happen in school are more likely to follow you home because of cellphones and social media, so there’s no real escape.

13 Reasons Why also addresses how things can go wrong when people who do need help try to reach out to those who are supposed to be able to help are unsuccessful because they either don’t have the proper skill set or the person in need doesn’t know how to ask. The most prominent theme in the show was if one person had done something differently Hannah would still be alive, which is a spin-off of the bystander effect. The series strongly advocates for basic human decency and communication and shows how the various people in Hannah’s life “failed” her in certain situations.

Overall, the series is a must see. While difficult to watch, it gives real insight into the modern high school/ teenage experience for a lot of people. Everyone can find at least one piece of the series relatable.