Kaitlyn Houlihan: An Upcoming Pace Graduate Who Made the Most of Her Opportunities 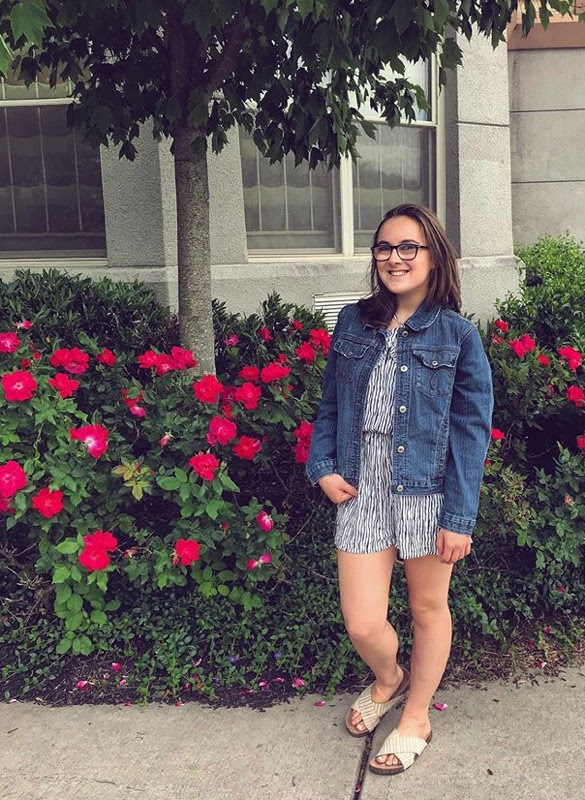 Meet Kaitlyn Houlihan, a soon to be Pace graduate with a strong dedication to service, leadership, and making the world a better place.

Kaitlyn Houlihan, a senior here at Pace University set to graduate at the end of the semester has already made a legacy for herself both on and off-campus. She is the president of Pace’s Model UN; the former secretary of the now inactive Poly-Sci Association; a participant in the Dyson Scholars and Residents Program; an employee of Safe Homes of Orange County, a shelter and resource center for victims of abusive relationships; and, most recently, a recipient of a Jefferson Award for service.

Houlihan’s journey at Pace began in 2016. She was drawn to Pace for its small campus feel and its diverse population, and since coming here, she feels she has improved her time management skills, devotion to her schoolwork, and found herself. She originally came here to pursue filmmaking, inspired by Blackfish, a documentary about the mistreatment of whales at Sea World, to make films that would have an equally impactful impact on people. However, after witnessing the events and results of the 2016 presidential election, she realized there were other paths by which she could enact change. She switched her major to political science, and after she graduates, she’ll attend Pace’s law school in an accelerated degree program.

When asked why she chose to graduate early, Houlihan said, “With this field that I’m in, the longer you’re in it the more you can expand yourself and do as many things as possible, and I want to do everything that I can. So, the faster I’m out [of law school], the more I can do later on in my life.”

In terms of life after academics, Houlihan knows that she is prone to changing her mind. At the current moment, she wants to get a job in the district attorney’s office and have a chance to work hands-on with survivors of domestic violence or in some sort of family court setting. She feels that, in contrast with her original goal of changing lives through film, this approach is more localized and personal, and that path is better for her.

Houlihan currently works with Safe Homes of Orange County, a shelter and resource center for victims of abusive relationships with administrative offices in Newburgh, New York and outreach centers in Sullivan and Orange counties. Kaitlyn helps operate their hotline and works one on one with survivors.

Houlihan shares a personal connection to this cause. In 2014 her cousin was in an abusive relationship and kept it hidden. Houlihan didn’t find out until after the relationship was over.

“I felt like if she had been in a place where she felt like she wouldn’t have to be embarrassed to talk about what she was going through, then that would be really great. So, now, looking back, I don’t think that anyone should have to feel the way she felt if they’re in a bad relationship in any way. So, I want to empower people.”

A friend of Houlihan’s mother is the executive director at Safe Homes, and when she saw they were hiring last year, she figured it could be a good opportunity for her. She didn’t expect to get the job because of her young age, but her age ended up being an asset. It helped her forge connections with the shelter’s younger clients, the youngest of whom are seventeen.

Houlihan feels that this experience has provided her with a unique perspective on how the world works that one would rarely find in a classroom setting.

“I’ve seen a different type of humanity, but treating people like people is what people want, and I’ve found that little niche. I’ve learned an unbelievable amount working there.”

In terms of her involvement here at Pace, Houlihan has been involved in Model UN since her sophomore year, and she became president when she was a junior. She refers to herself as the “old lady of the group” having been there for such a long time, and even though she was unsure if she’d like it initially, she’s sad that she must leave it behind in December.

Her Model UN experience began when her friend Alex, who was in her science class with her, invited her to join. Houlihan ended up helping write the group’s position paper, and she discovered that not only was she good at it, but she enjoyed doing it.

“It’s a labor of love really. It’s a lot of work. When you take on a leadership role in any organization, it’s so much, especially when you have to travel with people and read twenty-something papers every semester. If you don’t love it, you shouldn’t do it, but I fell in love with it. I love seeing my teammates just grow and blossom.”

In 2017, Houlihan participated in the Dyson Scholars in Residence program, a year-long Living-Learning Community held in Elm Hall, run by Jane Collins. Collins got to know Houlihan throughout the year and watch her grow through her experiences. She described Houlihan as an incredibly engaged student who makes great connections between her academic learning and the issues that are important in her life.

Part of the program involved Pace students acting as mentors to disabled adult students from the Successful Learning Center.

“Kaitlyn worked with one of the most disabled students in the program, creating a deep bond and friendship that transcended the work she was required to do,” Collins said. “I got to see Kaitlyn’s caring and maturity in that class.  She did very difficult work with joy and love.”

According to Collins, Houlihan’s efforts in the DSIR went above and beyond and came from the heart. She said that Houlihan’s sense of service, community spirit, and commitment, combined with the work she does at the shelter prompted her to nominate Houlihan for a Jefferson Award this year, which she won.

In 2018, Houlihan worked with CCAR on Voter Registration and Education Initiatives, where she met Heather Novak, one of CCAR’s associate directors. Novak described Houlihan as having a quiet confidence, a kind heart and a desire to impact her community.

“She takes an active role in making her community a better place,” Novak said. “She enjoys herself and is able to get others on board. She sees the connection between being active and educated about politics, how it is connected to the issues she cares about and what she can do about it. We could all stand to be a little more like Kaitlyn.”

Houlihan has two messages to send out to the Pace community as she prepares to move to the next phase of her life. The first goes out to anyone who might be struggling with an abusive relationship. She encourages them to make use of the resources available to them, including Pace FIRE and Safe Homes of Orange County, whose hotline number is 845-562-5340.

Her second message goes out to anyone who wishes to create positive change and accomplish great things. To them, she says, “Trust your gut. As long as you know in your heart that what you’re doing is what you want, then you need to go after it, and if you’re questioning yourself, then figure out what’s going on and reroute yourself, even if it’s just a little bit.”