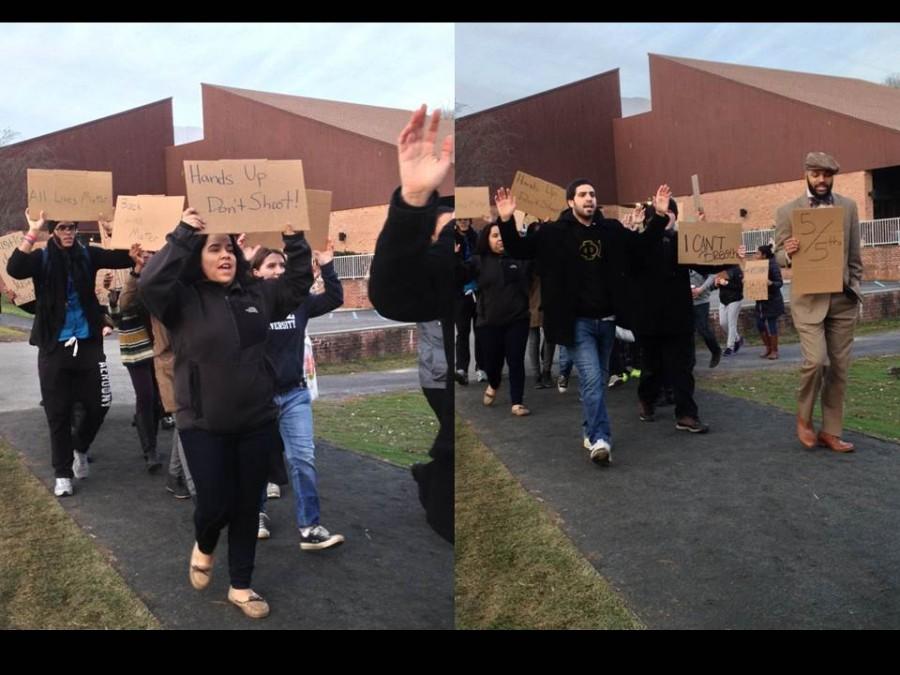 Students and faculty gathered around Choate pond to protest police brutality on Thur., Dec. 4. Protests were specifically in regard to the cases of Eric Garner, Tamir Rice, and Mike Brown.

Director of Multicultural Affairs and Diversity Cornell Craig opened by discussing the case of Pace student Danroy “DJ” Henry who was fatally shot by police in October of 2010.

Many of the students carried cardboard signs that read “Black Lives Matter” and “All Lives Matter” as they walked around the pond chanting “Hands up, Don’t shoot” with their arms raised.

After gaining approval from both Dean for Students Lisa Bardill Moscaritolo and Director of Student Development Rachel Carpenter, Lora reached out to the office of Multicultural Affairs and Diversity to spread the word.

“I think it’s important for all college campuses. Everyone should come out and say something that they believe in,” said Lora, who was motivated by friends who had participated in similar protests at other schools. “I think Pace hasn’t seen something like this. Pace hasn’t seen a protest.”

Lora added that the on-campus connection of DJ Henry has contributed to student interest in the cause.

“It affects everyone,” Lora said. “I think that’s why this issue is so important, because there are so many things tied to it. It’s gun violence, it’s police brutality, it’s race, it’s age, it’s how you look, it’s so many things interconnected. It was DJ Henry, but now the country is feeling us. It’s not just one person, it’s not just one campus.”

For Assistant Director of Multicultural Affairs Rachel Simon, educating others about the issue and its significance on campus was an important takeaway.

“I’m glad to see that there’s some political activism on the Pace campus,” Simon said. “It’s nice to see us in relationship with the larger national and local news, and even more powerful because I think many people here today learned about DJ Henry who maybe hadn’t heard of him before.”

Craig agreed with this sentiment, and hoped that it would inspire future action by students.

“We need students to be more politically active,” he said. “It encourages dialogue, debate, and political action. It gets us thinking, taking positions, and that can do nothing but help our campus environment and the students.”

On Wed., Dec. 10, Multicultural Affairs and Diversity will be having a “#WeCantBreathe” photo shoot in Kessel Well. Referencing the last words of Garner before being killed by a Staten Island police officer, the photo is intended to show solidarity for those affected by police violence.

Pace New York will additionally be protesting on Thur., Dec. 11 in both the cafeteria and courtyard.