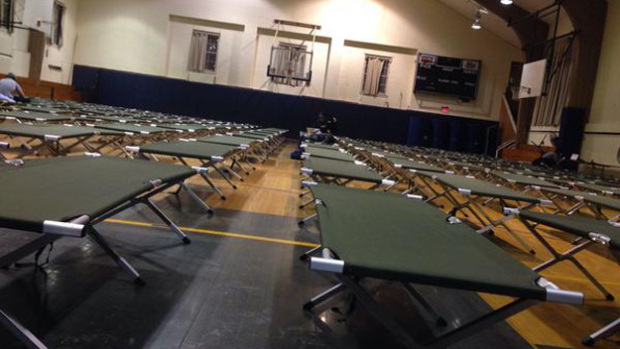 All displaced students have returned to their rooms following an evacuation of the Pleasantville residence halls last week.

The evacuation was the result of a gas leak, which caused all heating to be turned off in North and Martin Halls and the townhouses, as well as Kessel Student Center and Goldstein Fitness Center, among other buildings.

Townhouse residents were able to return by 4:30 p.m. Friday, while North Hall and Martin Hall reopened at 5:30 and 8:00 p.m. respectively.

During the evacuation period, Pace hired two additional contractors, as per an e-mail alert midday Thursday. New boilers were said to ship from Virginia.

Residents in the townhouses have expressed a lack of heat upon returning to their buildings. Parents and relatives of students took to the Pace University Westchester Family Association (PUWFA) Facebook group.

“My daughter lives in the townhouses and moved back in on Saturday to a very cold house,” wrote Nancy Bruns on Sunday evening. “She made multiple attempts to get in touch with her RD…This morning, it was no better, so I [called] security…Nothing has changed.”

Pleasantville residents were notified of the evacuation  at 6:21 p.m. on Wed., Feb. 18 via e-mail, and were told they would have to leave their respective rooms by 10 p.m.

Students with the ability to go home were encouraged to do so, while others were able to stay with Briarcliff residents or on a cot in Willcox Gym.

Classes were to continue Thursday as most academic buildings were unaffected.

North Hall resident and Brooklyn native Alexa Lauro said that she received the e-mail notification while in her night class. With a 9:00 a.m. class the following morning, Lauro opted to stay in a hotel with friends from California.

“It was very stressful because I was in class [when they sent out the alert],” Lauro said. “My professor didn’t know anything about what was going on, so when I told him I had to leave, he said no. I told him we were being evacuated and I had to go pack, so I just left.”

According to Lauro, many other students stayed in hotels during the evacuation.

“Who wants to sleep on a cot in Willcox?” she said.

She added that there has been talk among students and parents regarding compensation for hotel accommodations. So far, Pace has not responded to these requests.

Lauro remained at the hotel for one night before going home for the weekend. Many other students also went home, unaware of when the residence halls would be reopened.

“[Residential staff] told us to pay attention to our e-mails, and didn’t give us anything else to go by in terms of when we could go back,” Martin Hall resident and Connecticut native Holly Berlandy said. “It was handled very poorly.”

Berlandy received the notification while on a train headed back from her internship in New York City. She stayed with friends Wednesday and Thursday before returning home Friday.

Residential Life staff had Pleasantville students check out of their buildings and notify an RA of where they would be spending the night.

Pleasantville residents were permitted to return to their rooms between 10:00 a.m. and 12:00 p.m. on Thursday to retrieve any other items.

However, students offered that common hour would have been a more convenient window.

“They gave us a really limited window to go back to our dorm to retrieve more stuff,” North Hall resident Amelia Gilmer said. “I had class during the two hour window they provided, so I was pretty lucky I was able to get more clothes.”

Upon returning to their room, one student, who chose to remain anonymous, was notified by residential staff that safety checks had been conducted. They were then told that they were being written up for alcohol, which was found in the room during the searches.

According to Pace’s Student Handbook, “Punitive action will only take place in especially egregious violations of health and safety regulations, or when students fail to resolve the violation.”

“They confiscated beer from my room, which I’m allowed to have because both my roommate and I are 21, and have not given it back,” the resident said. “They went into our room to look for candles, which we have never had before, so they had no probable cause to enter my room.”

Residential Life staff is not required to notify students in advance regarding room searches, according to the Handbook. The document also suggests that students need not be present during searches. However, the Handbook does not have specific regarding room checks during special circumstances.

Heat in Kessel and Goldstein Gym was restored early Thursday morning, and food services were operational. Free coffee was offered to students as well as free pizza in Briarcliff courtesy of Chartwells.

Programming in Kessel for Wednesday night through Friday was tentatively cancelled in Tirsch’s initial e-mail. With the restoration of heat, events were able to resume Thursday. Despite this, some organizations maintained rescheduling.

Alpha Chi Epsilon’s (AXE) annual MS Benefit dinner, which was planned for Fri., Feb. 20, was moved to March 6 in order to maximize attendance. Consequently, the event space was also moved from Gottesman to Butcher Suite.

“[Pace] gave us the option to keep [the original date], which we didn’t do because no one was here,” AXE brother Rafael Puerari said. “They tried to make us pay fees [to reschedule catering], but we refused, so they just rescheduled it for another date with no extra charges.”

Off-campus purchases were temporarily shown to be deducted from the dining dollar balance. However, students were distressed to find that their Flex Dollars had considerably decreased over the weekend as a result of off-campus spending. The exact process by which Auxiliary Services allocated money has yet to be determined.