As the Trump Administration Aims for Transgender Erasure, Pace Students and Westchester County are Standing for LGBTQ Rights

While the Trump administration targets the trans community, local government and universities take a stand of support. 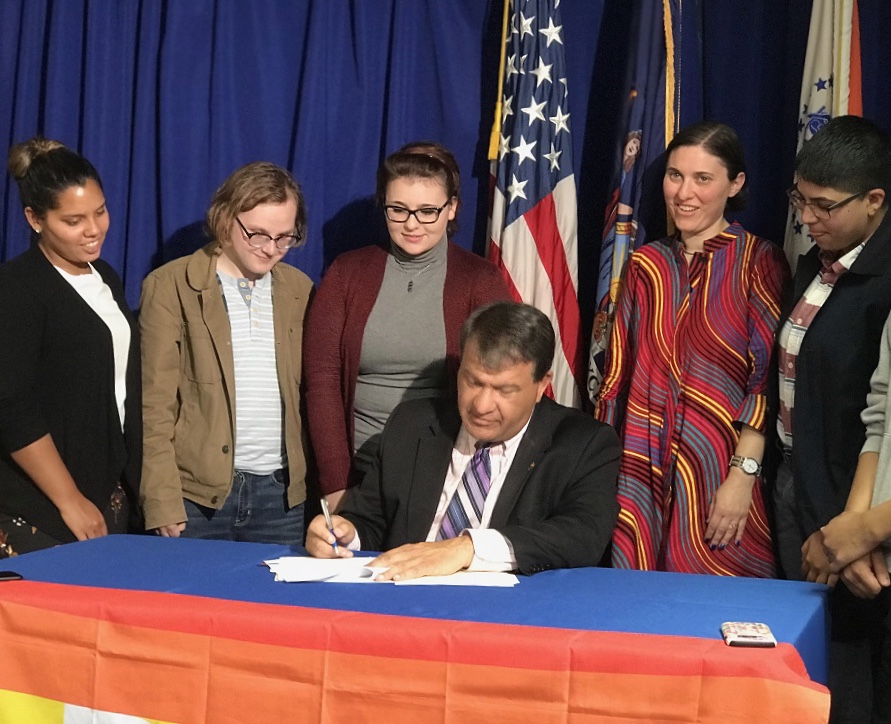 The chasm between local and national politics was evident more than ever this past week when the news of the Trump Administration contemplating rolling back provisions that protects the trans community came just days after Westchester County Executive George Latimer, accompanied by members of the Pace community, signed a bill banning conversion therapy for minors in the county.

The New York Times reported this Sunday that the Trump administration is considering rolling back Obama administration policies by defining gender as a biological, immutable condition determined strictly by genitalia at birth. The Obama Administration’s legal concept of gender was much looser, acknowledging those in the trans and gender nonconforming community by recognizing gender mainly as an individual’s choice and not determined by their sex assigned at birth.

Now, the Department of Health and Human Services is pushing to establish this new definition of gender under Title IX, a law that bans gender discrimination in education programs that receive government financial assistance.

“Sex means a person’s status as male or female based on immutable biological traits identifiable by or before birth,” the department proposed in the memo, which was drafted last spring. “The sex listed on a person’s birth certificate, as originally issued, shall constitute definitive proof of a person’s sex unless rebutted by reliable genetic evidence.”

With 1.4 million out trans individuals in the U.S. – including many of whom that are Pace students – this will ultimately erase their identities from existence in the eyes of the federal government. This news has sparked fear and outrage from the LGBTQ community and their allies.

Our students and staff of the @lgbtqacenterpacenyc are out today on the steps of City Hall in support of #transrights.

Florence, a trans sophomore student at Pace, was not shocked by the memo when she read it Sunday morning, but it disturbed her nonetheless.

“The important thing to remember is just because something isn’t shocking, doesn’t mean you don’t go through shock about it,” Florence, who asked for partial anonymity in this article, said. “It was a stressful morning.”

If the considered proposal becomes law, it will be one of the many steps the Trump administration has taken to roll back on trans rights. In march, the administration announced a ban on trans people serving in the military. With continuous acts targeting the community, Florence discussed what she believes the administration’s end goal is regarding this subject.

“I think their end goal for trans people is to roll back as much as they can in the four years they’re in power,” she said. “I feel Trump is largely indifferent on this issue, but it’s the people around him who cares about this. Often times people talk about Trump and I say, ‘No, we need to talk about the administration as a whole.’ There are people in the administration who are not entirely okay with this but still okay with the anti-immigrant, anti-education and everything else. I think that’s the important thing: their end goal for trans people is the same for immigrants and marginalized groups, which is to take away their power and do as much harm to them as possible in the little time they have.”

255 miles away from the White House, Westchester County executive George Latimer was joined by Pace students and members of Pace’s LGBTQA Center this past Thursday at the Westchester County Office Building to sign a measure that has yet to become national or state law. In a bipartisan vote earlier this month, the county’s legislatures voted to ban conversion therapy in the county.

Conversion therapy is the practice of attempting to change an individual’s sexual orientation or gender identity by using psychological or religious interventions. This measure was introduced to the Board of Legislators directly by Latimer and passed the Board unanimously, 17-0, officially making the practice a fineable offense that can lead to jail time.

“This practice is not acceptable, it is not legal, it is not right and we will make sure we don’t stand for that in Westchester County,” Latimer said Thursday, which was also fittingly LGBTQ Spirit Day.

Chris Oldi, Chair of the LGBTQ Advisory Board, called conversion therapy “damaging,” saying it has long-term physical and psychological effects on those subjected to the practice.

“With this legislation, we can ensure our minors in Westchester County are safe from this practice,” Oldi said.

Oldi said the board has no knowledge of any conversion therapy practitioners in the area, but “anecdotally, we know it’s occurring.”

“No one came to us and said they were subjected to that but we believe it probably is happening and the fact is, it could happen at any moment, which is why it was important to have the County Executive pass this,” he said.

Rachel Simon, the Associate Director of Multicultural Affairs & Diversity Programs and LGBTQ Coordinator at Pace, who attended the signing, was “thrilled” with the board unanimously passing the bill.

“The practice of conversion therapy is in direct conflict with the mission of inclusion and personal development advanced by community-based LGBTQA centers, as well as those at colleges and universities throughout the Lower Hudson Valley,” she said. 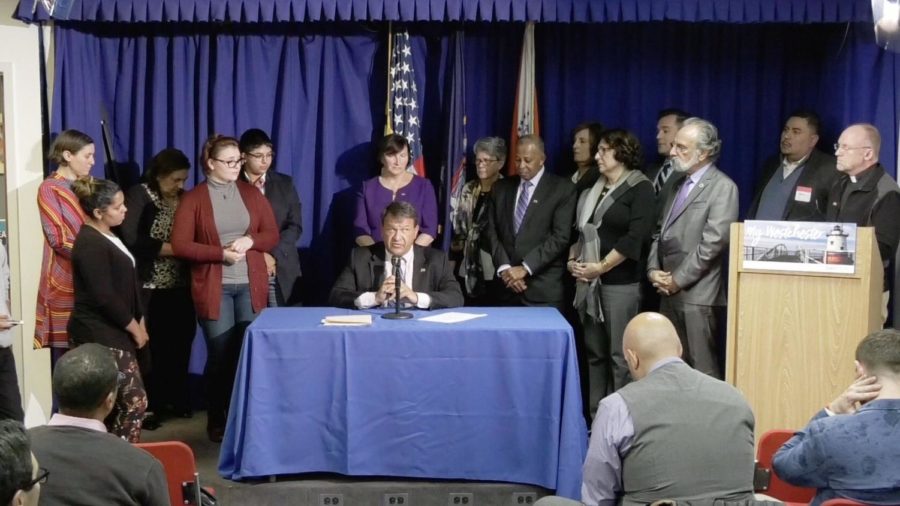 The American Psychiatric Association condemns conversion therapy and says “efforts to do so represents a significant risk of harm by subjecting individuals to forms of treatment which have not been scientifically validated and undermines self-esteem.”

Few people know the harms of conversion therapy better than Mathew Shurka, the co-founder of Born Perfect: The Campaign to End Conversion Therapy, who arrived at the office building after the signing to speak with legislators and Pace students. Today, Shurka is living a positive life as an out gay man in a committed relationship.

But a decade ago, the idea of living a healthy life with a boyfriend was foreign to Shurka.

From 2004-2009, Shurka attended conversion therapy, being treated in New York, Virginia, New Jersey and California until he turned 21.

While attending, he was not allowed to speak with his mother or sisters, which was an attempt to “defemenize” him. Despite how long Shurka tried to change, it did not work.

“Something you see that is common among teens in conversion therapy, the blame is on them when they’re not changing,” Shurka said. “So even though I knew I was not changing, I believed in it – I had a licensed professional treating me – and I thought I wasn’t working hard enough, I thought I wasn’t putting enough effort in and I put all the blame on myself, and not the therapist and the practice itself.”

“Therapists are there to help you, treat anxiety and make you feel like you’re in a safe space,” he continued. “So when they manipulate you by creating a safe space by saying you have to change is detrimental to those in treatment and that was the case for me and many of the minors I met. I met probably thousands of them during my five years in treatment.”

Once Shurka realized changing his sexual orientation through prayer was not working, he contemplated leaving.

“It took some time,” he said. “I was going through it year by year, and the people they presented to me who they say succeeded, never actually succeeded. In their teachings, you had to control your urges, but it wasn’t really changing anything. The falseness of their treatment became more obvious as time went on.”

The five-year stay in conversion therapy impacted Shurka in two different ways. For one, he still has trauma from it and has had seven panic attacks since coming out because he “didn’t know how to become a part of the world while owning my identity.”

On the other hand, Shurka’s experience has led him to a life of activism. First, he uploaded a YouTube video for the It Gets Better Project in 2012. After gaining attention from that, something sparked in him, and advocacy became a full-time position.

In his six years of activism, 2018 has been the most successful.

“This year alone, I’ve gone to ten hearings nationwide and spoken to 160 legislatures, both democrat and republican,” Shurka said. “And it’s been a successful year, five states alone signed this bill into law and at least 15 counties signed it.”

With Albany County, Eerie County, New York City, Rochester and Ulster County as the only other areas in New York with a conversion therapy ban,  Westchester is one of the leading counties in LGBTQ rights.

Florence praised the bill signing and the bipartisanship that led to it, but said she has doubts a move like this can be made nationally.

“For one, I think the center of both of the parties is different,” she began. “I would say the current center of the national Republican party is much more to the right than even the most right-wing Westchester republican, especially on this issue. But I also think it’s important to understand that all politics are local, but national politics still matters. These protections are awesome for the county but decisions on these issues only being a county-to-county thing can be harmful, especially for something like conversion therapy which is so damaging and so dangerous and should be illegal because it doesn’t work, there’s no science behind it.”

“And secondarily, there are people who will seek it out because they think it will make them ‘normal,’ and having those services available… ultimately will end up hurting young trans people who think there’s a ‘cure’ to this or a way to ‘fix’ this,” she continued. “So I think it’s amazing Westchester County signed that bill and there was no republican opposition to it. But I also don’t know if a bill like that can pass the current U.S. senate with with all 49 democratic senators voting for it and that I find deeply disheartening.”

Allies of the trans community have spoken up against national policies that targets the trans community. Florence gave guidelines to what cisgender individuals can do to support trans people during this time of attempted erasure.

“In terms of what cis people could do: Listen to trans people; Do what they tell you to do if you can; and three, speak up when someone around you says something that’s transphobic,” she said.