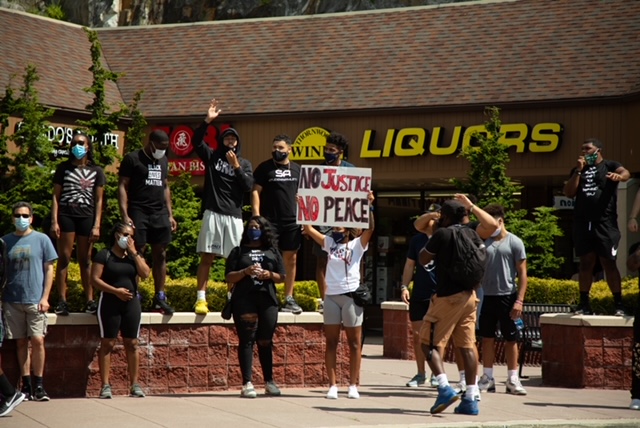 Pace students during a protest in August in Pleasantville, N.Y.

On May 25th,  a new chapter on racial injustice opened in Minneapolis, Minn. George Floyd, a 46-year-old African American man was killed and nationwide protests began to demand racial justice and social equality.

As the trials of the killers of several African-American people in different parts of the country take place, peaceful protests across the nation have yet to stop. College campuses have hosted these protests if not physically, virtually, and have raised awareness of racial injustice and inequality.

Black Student Union (BSU) is Pace’s multicultural organization where students from a variety of ethnic backgrounds gather weekly to discuss social issues, come up with ideas to raise awareness of racial injustice, and voice their concerns.

“Pleasantville in general, obviously, it’s not a big place for minorities.” senior nursing major and a member of BSU Brandon Joachim said. “I think we only make up around 10 percent of campus black people. So it’s just a really good place for us to sort of connect and communicate with each other.”

As the protests spread nationwide, the union has gathered to demand justice on behalf of DJ Henry, a 20-year-old football player who was shot dead by a police officer in , N.Y. on Oct. 17th, 2010. Since Henry’s death, he has become a symbol of racial inequality at Pace.

However, his legacy had not been known by many up until Floyd’s death. As the people around the nation have begun raising concerns over the killing of innocent people of color, Pace students and BSU question why Henry has not been given the support he deserved.

“I really did not know D.J. until last year and that’s really surprising” Joachim commented. “So over the summertime, especially what happened with George and all these other people, I felt heartbroken when I saw D.J. Henry, when I heard his story fully.”

To honor Henry’s legacy and to raise awareness of his brutal death, the union thinks that Pace should retire his jersey and possibly rename the football field in his name.

“They also need to properly educate every student and faculty member of his story and take an active role in getting him the justice he so rightfully deserves,” stated Amari Perez, sophomore psychology major and president of the BSU.

The killings of Henry, Floyd, and many other people of color have brought attention to lack of education in cultural diversity. So the BSU has come up with seven demands asking for Pace to properly educate all faculty and students.

“We need changes to be made in the curriculum that put people of color in a position to succeed by feeding us the true history of our cultures and others not only through the white washed history and lack of history they feed us now,” Perez stated.

As the social justice week approaches, the union wants its voice being heard. The protests and marches have no meaning if changes are not made to support people of color.

Pace should take action and respond to the BSU’s demands, Perez said, “We don’t want any marches, rallies, presentations and etc. that don’t end in us receiving the institutional equality that we deserve.”

Although protests nationwide have brought attention to racial inequality, Perez doesn’t think that ‘enough has changed’ when it comes to racism. But she agrees that students are more aware of the discrimination they have faced. “The students have definitely broken their silence, from weekly meetings, to marches, to rallies and it is all amazing to see,” Perez commented.

Pace students have organized three protests since August. Planned by the BSU and the athletic department, Perez believes that protests have helped ‘students feel heard,’ and to honor those who have lost their lives to the ‘raging issue of police brutality’ throughout the country for years.

Protests organized by Pace students have remained peaceful even though there have been verbal attacks reported. As students have taken on to the streets to voice their concerns, they have successfully shown their demands. “They were trying to really do something wrong, but we all stayed really, really peaceful and civil,” Joachim said.

The protests not only have caused people to raise awareness about racial inequality, they have also united the Pace community as a whole. Students from different backgrounds attended protests to make a change.

“It unites a lot of people, which I thought was a big thing, just being together for a common cause,” Joachim stated. “It really does connect people on campus, which we definitely need if we want to make any change and that’s going to be from both sides.”