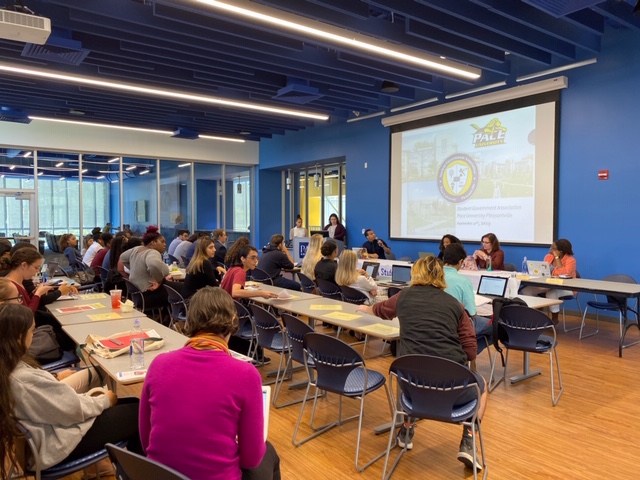 A pre-pandemic senate meeting. This year, senate will be conducted in a HyFlex fashion so that students have the option to attend via Zoom or in-person as they desire.

On Sept. 7, SGA announced that this semester, student senate meetings will take place on Mondays from 11 A.M. to 2 P.M., instead of Fridays at 2 P.M. as they did in previous years. The SGA e-board reached this decision during their summer meetings, using Zoom and Google forms. They made this change to accommodate their conflicting schedules.

“Monday seemed to be the only day that worked for everyone,” says SGA Executive VP Irach’e Teague.

However, this time change does not work for all of the student senators. Natalie Suoy, the senator for Psychology Club, says that her organization needs to find a co-senator since she cannot make all of the meetings.

“I was definitely surprised by the meeting time being changed to a Monday,” Suoy says. “It has been hard to find a co-senator because of the time and day the meetings are.”

Sultan describes the new time slot as “precarious”, and he wishes that this change was discussed with the rest of the Senate before it was set in stone. Kathryn Capobianco, the Pride at Pace senator, also wishes that students could have had more of a voice in this decision, and she hopes that the e-board might agree to reconsider the meeting time as the semester progresses. While she understands the board’s position, she is also concerned about how the change will affect the rest of the senate.

“Students are busy, and we’re going to keep getting busier,” Capobianco says. “That time is probably going to conflict with a lot of classes and everything… I have a class that goes from 10:35[A.M.] to 12[P.M.], so I’m going to be late.”

Teague says that a few students have reached out to the e-board to express their concerns, but that that number does not equate to the number of organizations on campus.

SGA President Kimberly Mars says that one of her goals this semester is to be an advocate for all students on campus.

“I want everyone to know that I take my position very seriously and that I am here to help the student body in any way that they may need,” Mars says. “SGA has a lot of great things coming up this semester, so be sure to keep an eye out for them.”