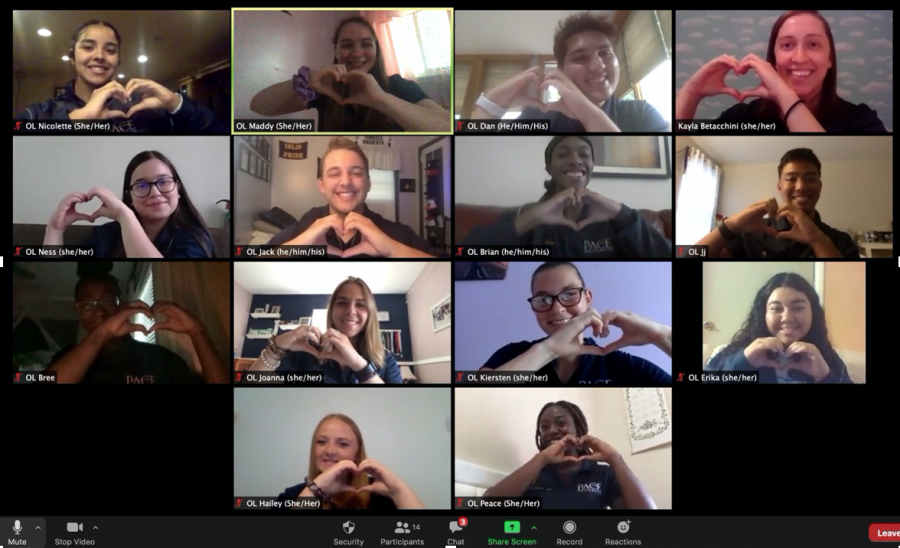 This year has been all but normal and the same goes for this past summer’s Orientation.

I had the chance to speak with some of my fellow Orientation Leaders, Hailey Schnell, Madeline Maxwell and Daniel Demartis to reminisce on our organized chaos of a summer.

Having an Orientation completely online for the first time ever would inevitably have its challenges. “Personally, I felt like it was really hard to engage with the students” Schnell stated. It was definitely difficult to build a genuine connection with students, “but I feel like we did get all the information we needed to get out to the first-year students” said Demartis.

The setup of Orientation could have contributed to this challenge. There are so many activities that incoming students cannot participate in via zoom…*cough cough* OL Jj going undefeated in the lip sync.

That means that the Zoom call consisted of mainly essential presentations, and much less time that OL’s had with their group. “I feel like we made the most out of the situation even though it wasn’t what we expected out of the summer” Maxwell claimed after discussing the challenges of online Orientation.

While talking about what incoming students and Orientation Leaders missed out on due to online Orientation, Schnell, without hesitation said, “Jj losing in lip sync” with Maxwell immediately agreeing and Demartis laughing. As you can see, my peers really supported me on my journey to make the impossible possible.

Why did I stress the lip sync activity so much and make it one of my main goals as an OL? Maxwell describes it perfectly, explaining, “that was when your group really got together. Because at first, everyone is shy and intimidated.” She continues, “Once we actually did the lip sync, that’s when everyone was actually talking to each other.”

During Orientation, I was more than content if I witnessed a student make a friend over Zoom. Even if that friend was me or another OL. Frankly because, my main goal (above going 5-0 in lip sync) was to make students excited to start their Pace Path despite our current situation. Having the assurance that you know at least one person coming into Pace makes the experience ten times better.

Every other Orientation aside from this year’s was two days long, including sleeping over in Alumni Hall in between the two days. This year, students missed on a crucial part of their Orientation experience aside from the lip sync: the sleepover.

“I think that one night is so different. It’s your first time really getting away” Schnell stated. It’s truly an organic on campus experience without being moved into campus which helps students socialize outside of their Orientation group.

With these challenges, however, Orientation was a positive experience in such a negative time for this summer’s Orientation Leaders. Schnell believed that we developed our adaptability this summer as well as “being able to deal with a bad set of cards.”

Most apparently, “we learned a lot of Zoom skills” Demartis noted. Working solely through this program, it has been helpful to becoming better versed for something that is incredibly important for today’s education.

With all of the activities and experiences that incoming students missed out for their Orientation, I feel that being online did not affect the OL experience one bit. I was lucky enough to bond with a great group of Setters who are heavily involved, well-known and well-respected on campus.

Things may have been different if we were in person, but we still had the chances to make a group chat that made our phones buzz nonstop.

We still had chances to pester each other with inside jokes.

We still had the chance to try and unmute each other.

We still had the chance to welcome the class of 2024.

And we still have the privilege of being able to say we were the 2020 Orientation Leaders.

That being said, Orientation could have been much worse. But all we can ever do is try to make the best of our situation. Without a doubt, I would definitely do Orientation 2020 all over again.