Review: Leonardo DiCaprio’s ‘Before the Flood’ 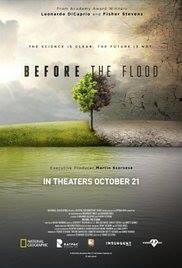 Image Courtesy of Before the Flood's Official Facebook Page

The documentary Before the Flood by Fisher Stevens stars adored celebrity, Leonardo DiCaprio. Not only is DiCaprio known for his many movies, he is also known for being a climate change activist.

A decade ago, Leonardo DiCaprio narrated the film The Eleventh Hour, which spoke about what we can do for saving the planet before it’s too late. Yet, 10 years after DiCaprio seems to be more worried.

Rather than just being a voice over, Stevens was able to incorporate DiCaprio’s presence on screen and engage the audience cleverly by introducing the reason for DiCaprio’s global passion, which began in his early twenties, where Al Gore taught him about global warming in the White House.

DiCaprio was assigned by the United Nations to be a U.N. Messenger of Peace back in 2014 and pass along the information about climate change.

Through this film and using his platform, DiCaprio was able speak to a plethora of highly qualified individuals such as President Barack Obama, President Bill Clinton, US Secretary of State John Kerry, and Pope Francis.

The film’s main concept is that while science is clear, the future is not.

DiCaprio shows the audience drastic effects climate change has caused the world to face such as the Canadian oil sands—Sumatran Forest—where the ecosystem is deteriorating because vast quantities of palm oil is extracted.

The Arctic Circle is impactful because he sees first hand the devastation humans have created as he walks on melting ice. He also traveled to India and China to see what efforts have been made for climate change.

Stevens really made sure that the passion that drives DiCaprio to be such a relentless global warming endorser was present in the film. This alone was a great way to hook the audience and allow them to take what they are watching seriously.

Before the Flood does show a lot of bad things, but by Stevens showing and giving steps on what we can do to help fix the situation at hand, it really balances the deep and sad to a more positive outlook.

When speaking to president Obama in the film, he asked if the policies that were for climate change were to be changed by a new president what would be the outcome, and as Obama speaks, using the comparison of gay marriage, he says the future is up to the people.