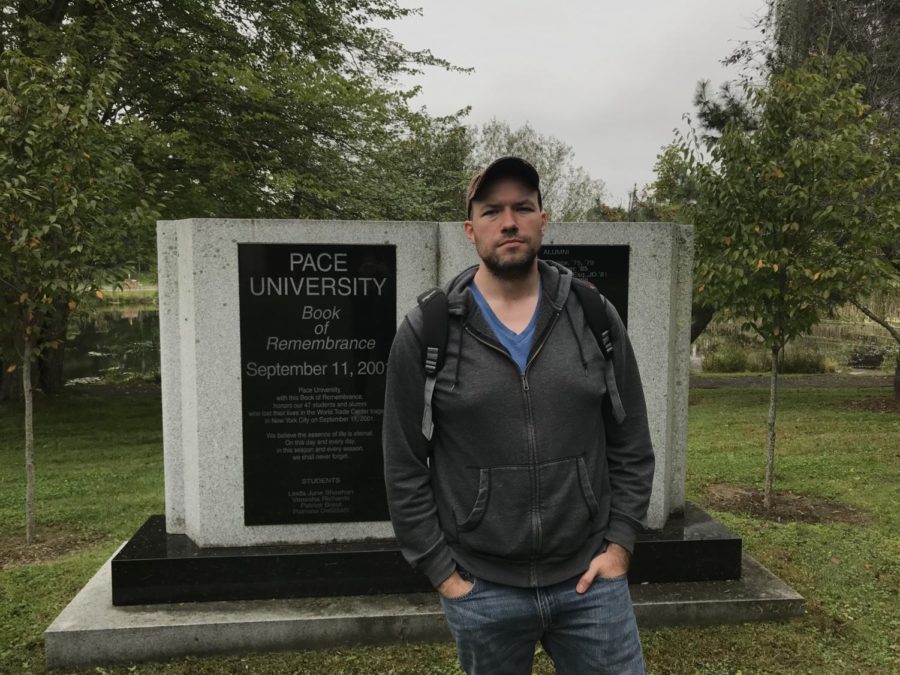 Before Christopher Nocket, a Digital cinema and filmmaking major, became a noticeable face at Pace, he served a four-year stint in the U.S. Army from 2002-2006. He was stationed in Washington and was then deployed to Iraq. There, Nocket witnessed different forms of devastation. Wednesday is World Mental Health Day and Nocket discussed the impact his stint in the army had on both his mental health and those who served with him.

Interviewer: While you were in Iraq, what kind of things did you see or experience?

Nocket: That’s a pretty open question, what do you mean?

Interviewer: Was it intense? Was it-

Nocket: I mean it was boring, but do you mean…were there dead people? Was there horrible stuff? Sure.

Interviewer: I guess thought that comes to my head when I think about being in Iraq and being in the military would be traumatizing. Would you say the same?

Nocket: Sure. But at the time, I would say that you’re not in the real world, you know what I mean? You’re in a situation that’s so far removed from reality that you don’t have time for trauma. You just put your nose down, you get the job done. So, if you see something horrible happen, you probably don’t have time to digest that and then later on is when you really deal with that sort of stuff.

Interviewer: How has that impacted your life later on after serving?

Nocket: I don’t know, I think I got by pretty okay, I mean… I have a pretty good sense of self and I had people around me that didn’t let me slip through the cracks. So, some people they… they did not have that luxury, so I have a few friends who they slipped through the cracks and they wound up killing themselves.

Interviewer: Would you say you have any form of PTSD?

Nocket: I think that everyone- I mean it’s not just relegated to the military, I mean you have sexual assault survivors or people who grew up in an abusive household or people who were in car accidents. So, Post-Traumatic stress is…it’s not unique to the military, it’s just that you get more exposure to it there because you’re more likely to get put in a horrible situation. So, I definitely carry some of it with me and I deal with it sometimes in healthy ways, in other ways not, but, yeah. A lot of people have it.

Interviewer: Would you mind sharing the healthy ways that you deal with it?

Nocket: I talk about it, you know, with people. I talk about it with my wife or with friends that I have who are still in or got out. I think that the biggest boogie man with depression or PTSD, or any of the various mental illnesses have, is when you choose not to talk about it. When you choose not to address it. And that just gets its hooks in you and it festers and that creates the ability for the disease, disorder, what have you, to really start running your life. When you pretend it’s not there, that’s the dangerous things. You have to acknowledge it.

Interviewer: Just to talk about it?

Nocket: I’m working on my minor in psychology so it definitely helped me expand my views in terms of what [and] how the human mind functions and one thing that all disorders seem to have in common is that they need to be brought to the surface for anyone to make any sort of progress.

Interviewer: Yeah, that makes a lot of sense. I would agree with you on that. So, are there any days that are just, I guess, lower than others, emotionally? As a result of your experiences?

Nocket: Yeah. I look at it like this. I mean, most people have low days, you know, people- and it’s usually related to trauma. So, if you say you lost a parent, you know, their birthday is going to be a hard day and the day they died is going to be a hard day. For me, hard days are September 11th for sure, because my cousin was in the second tower and at the beginning part of October is also hard for me because- there’s a few dates there. I lost friends and we were very close to being done with our tour, so it was especially upsetting to me because these are guys who-one of them was stop-loss- I don’t know if you’re familiar with that.

Nocket: Stop-loss is a program the military initiated where people were getting ready to finish their contract but we were also getting ready to deploy into a major mission so they declared we need all hands-on deck, you can’t get out until after you’ve done the deployment. So, I mean, this is a guy who shouldn’t have been there in the first place, and all sorts of stuff- it’s too long to get into, but stuff went sideways, he wound up in a different unit, we didn’t even have him with us and a lot of us feel very bitter that he died because he was not- we feel like if he had been with us he would’ve been fine. And moreover, he shouldn’t have been there to begin with. There’s a lot of hard feelings about that, a lot of needless loss of life on both sides of the conflict.

Interviewer: On those low days, how would you try to get out of feeling so low? Or to get yourself out of it?

Nocket: I just try to relax. I try to find people who I know will help me deal with my feelings. You know, like I said you have to bring it out, but at the same time I’ve talked about this sort of stuff a lot. And I’m to the point where I don’t necessarily want to bring it up every year. And…so I want to be around people who are understanding of what’s going through my head and aren’t necessarily gonna pick at me or you know, “Hey what’s the matter Chris? What’s going on?” It’s like you know what’s going on, let’s have a drink, let’s watch a movie. Let’s not dwell on, you know, stuff that’s 16 years in the past.

Interviewer: So just, kind of ways to distract yourself? Rather than- because I understand how it could be hard to talk about it for so many years.

Nocket: Yeah. Just- I think, you know, you have to face your problems initially, but that doesn’t mean you have to face them every day of your life. You don’t have to relive your trauma. Understanding that it’s there and knowing that it has a grip on you in some way shape or form is probably a good starting point for most people. I have it pretty well under control, you know, I’m not having hysterics, I’m not contemplating suicide or anything but it affects everyone differently. I think I’m mostly just looking to relax, have a drink in their memory, and…remember good times with them, rather than how they ended.

Interviewer: Kind of branching from what you just said, the men and women that you served with, like your friends, do any of them have it a lot worse?

Nocket: Sure. Oh my god. I mean, to varying degrees. Like I said, I have friends who have killed themselves so they had it about as bad as you can and I think- this is probably unique more so to service people whether they’re firemen, cops, military- they will often hide it because a lot of the times in those jobs you get conditioned to think that your individual problems are not of importance and you have to think of the good of the whole- the company the unit whatever, so you don’t want to burden them with your baggage. And…so they’ll conceal it, which is I think how most of them manage to slip through the cracks and not get noticed. It’s funny, because I knew I was having this interview today and I had to do a paper in class and it was about statistics and I chose suicide [as the topic] and…that is a big one. Being aware of your coworkers, your friends, your loved ones, and you see them acting differently, ask them what’s up. You know, that’s huge and I wish that some of my friends had been more…overt in their off behavior so people would have noticed and picked up on it and said, hey what’s up? What’s wrong? That the first step in stopping someone from committing suicide is noticing that they’re not their usual self.

Interviewer: So, the final question that I will ask, unless there’s anything else you would like to add, is what does Mental Health Awareness Month mean to you?

Nocket: Don’t make it a month. Make it a day-to-day thing. If you feel down or you feel bad and even if you’ve never been diagnosed with anything, talk to a friend. Don’t sit on your feelings. Let them out, in a constructive way if possible, and talk to someone because they might be going through the same thing or they might’ve gone through something similar and they might be able to help you. Don’t let your demons fester, that is a huge one. And make it a part of your daily checklist. You know, brush your teeth, you put on your deodorant, check your face in the mirror, do a mental checklist: How am I feeling today? What can I do to make sure that I’m gonna keep being the best me I can be? That’s pretty much it.

Interviewer: Is there anything else that you wanted to add?

Nocket: Just what I touched on before, it’s not, you know, being sad and PTSD especially, is not unique to service people or someone who’s had a life long history of depression. It can happen to anyone, literally. You know, you get that series of dominoes going, financial troubles, doing bad in school, breaking up with a boyfriend or girlfriend, mom and dad are splitting up, one of them kills themselves, you know, that sort of thing, can lead to a chain reaction. So, I guess people just need to know to be aware of it for themselves and be aware of others. If you know your friend had something horrible happen, ask them how they feel, talk to them.