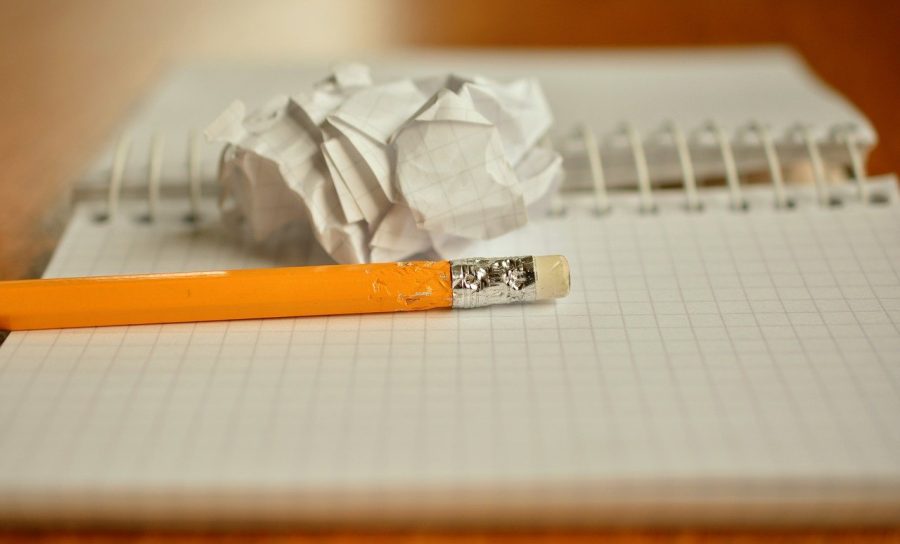 English professors from Pace's NYC campus hosted an event to discuss the impact of language bias and how professors can address these biases in their teachings.

A group of English professors from Pace’s New York City campus- Kristen di Gennaro, Phil Choong, Tran Tran, and Meaghan Brewer- hosted an event on Oct. 30 to discuss how linguistic biases can promote discrimination in the classroom and impact the grades of multilingual students and students who speak different dialects of English.

The event, entitled “Anti-racist Writing Pedagogy and Assessment: Decolonizing our Curriculum and Dismantling the Grammar Police”, was part of Pace’s Social Justice Week. The goals of the event were to educate professors on the covert biases embedded in most grading systems. While providing them with alternative methods of assessing writing, and dispel the myth of “Standard English”.

The event’s hosts discussed the idea of “Standard Language Ideology”, which asserts that the form of English applied in the classroom is neutral, stable, and linguistically superior, and that other dialects of English are deviations from these standards.

The hosts combatted these ideas by explaining that “Standard English” is not the origin of other dialects; it itself is a dialect that falls under the umbrella of the English language, and that, like other dialects, it is ever changing and more commonly found in specific populations.

In this case, it is a dialect more commonly found in middle class white communities, which can put students of other races and socio-economic statuses at a disadvantage if they are unable to comply with standard conventions in the classroom.

The hosts hoped to dispel the idea that “a lack of clear writing indicates a lack of clear thinking” by encouraging professors to search for the meaning at the center of their students’ work and communicate with their students to make sure that they have a full view of what they do and do not understand.

They hope that professors can see that a student might have good ideas and sharp intellect, even if they struggle to communicate it in the standard fashion.

They also explained they aspire that professors have more patience with multilingual students who might still be in the process of learning English. Natural language learning “follows its own syllabus” and students need time, input, examples, and opportunity for growth.

It was mentioned that certain cultural concepts within a language might lead to certain mistakes. For example, some nouns that are “noncountable” in English might be “countable” in another language, which could cause students to pluralize words that are traditionally only referred to in the singular form. While a native English speaker might say “after I conducted my research”, a nonnative speaker might say “after I conducted my researches”.

After explaining the potential disadvantages that Standard Language Ideology can create, the event hosts offered attendees alternative methods of assessing students that shift emphasis from the students’ ability to adhere to English standards and place emphasis on the class content.

They encouraged professors to incorporate critical reflection into their lessons and to give students a chance to submit assignments in drafts so that they have a chance to build on their work and learn what is expected of them.

“Anti-racist pedagogy isn’t exactly new, and I think a lot of professors have been working for a while on decolonizing our curricula,” Brewer said. “For example, including more readings by authors of color, looking at areas where our courses might be privileging Western, white perspectives. But I think a lot of professors, even while doing those things, might still view our assessment practices – particularly the way we’re grading and evaluating student writing – as neutral when they’re not. Policing language and literacy in school isn’t separate from the racism and oppression that we see in society, so professors need to examine the ways in which we might be complicit in upholding white supremacy through the ways we evaluate our students… in some cases there may be well-meaning faculty who overlook how their assessment practices might unfairly disadvantage multilingual or multidialectal students.”

PICTURED BELOW ARE SOME OF THE TIPS, RESOURCES, RUBRICS, AND REFLECTIVE QUESTIONS THAT THE EVENT HOSTS GAVE OUT TO HELP PROFESSORS BETTER ADOPT ANTI-RACIST GRADING PRACTICES. 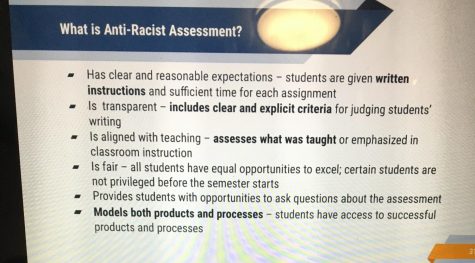 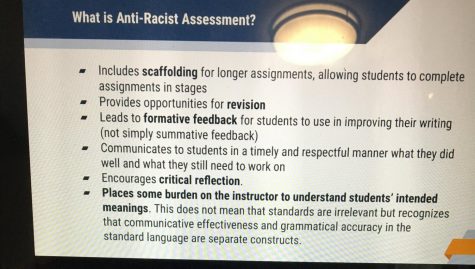 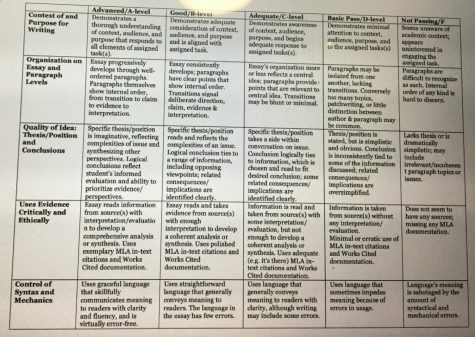 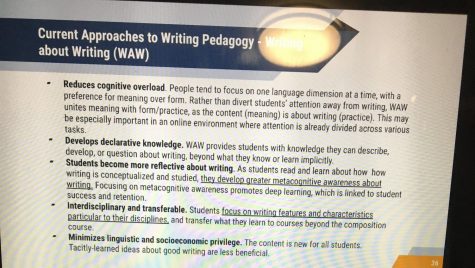 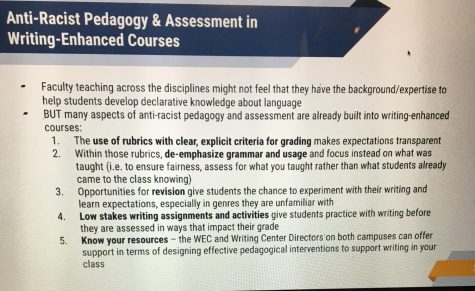 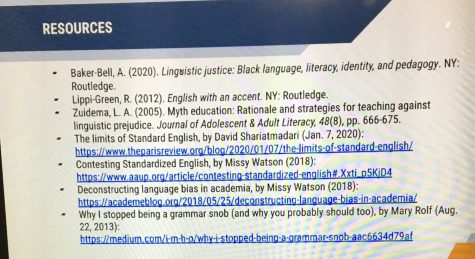 The hosts stated that while language standards are not irrelevant, it is important to validate other dialects of English and their rich histories and critically evaluate the origins of “the norms” and the true source of their apparent prestige in society. They hope that students and professors alike can be more aware of language and the way that people perceive it, and that no student’s background puts them at a disadvantage in or out of the classroom.

“Combating this type of hidden discrimination is difficult and goes beyond our courses,” di Gennaro said, “but I think one place to start is within the English Department, namely the composition courses. Specifically, I would like to see a shift from courses centered around false assumptions based on Standard English ideology to courses centered around language and linguistic awareness. Such a shift in focus would go a long way towards anti-racist writing pedagogy and assessment.”

Brewer, like di Gennaro, discussed what she hopes to see implemented in the future.

“I want to see more honest discussions among faculty and students about anti-racist pedagogy and assessment,” Brewer said. “I try to be as transparent in my pedagogy with my students as possible, and I include readings on things like code switching or prescriptive grammar in my courses. Students really seem to get it and to feel like they can have more of a stake in how they’re educated and assessed. I think if other faculty brought students into the equation, and included readings and discussions in their courses around language and writing, that it would benefit everyone involved.”