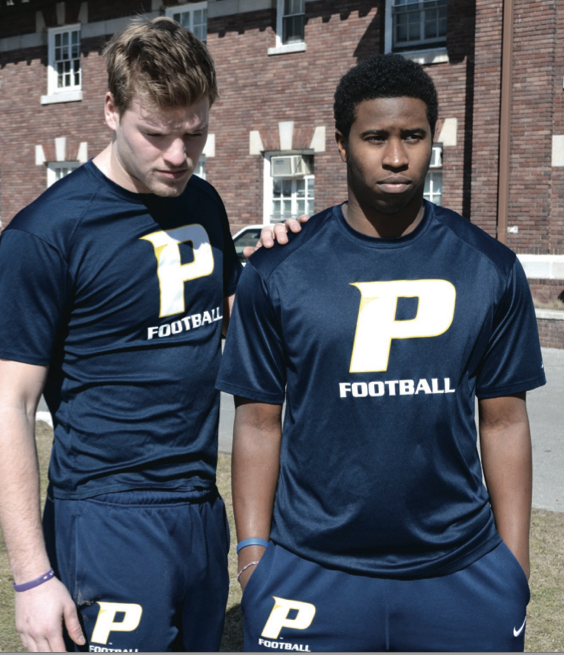 The “N-Word” has come to serve a dual purpose in the English language. It conjures up thoughts of oppression and persecution yet is used in the vernacular as a term of endearment by those who should, by all accounts, be offended.

Charged with bigotry and dripping with hatred, the “N-Word” is but a common part of the lexicon of the current generation whose parents and grandparents fought so ferociously for the equality of African Americans. It is a word that many lyricists and athletes have welcomed as an acceptable constituent of American culture.

The “N-Word” recently made headlines in the National Football League (NFL) when records of harassment involving offensive linemen Richie Incognito and Jonathon Martin of the Miami Dolphins surfaced.  Then last month, reports indicated that the NFL was considering penalizing those who use racial slurs, specifically the “N-Word”, on the playing field.

“Here you have a word with such a horrible connotation,” said Pace University men’s assistant basketball coach Nat Harris, a biracial American who has had a successful coaching career that included time with NBA’s Orlando Magic. “For some African Americans it was the last word that they heard before they were hung.”

To many, the “N-Word” is used in situations bereft of any racial conflict as it has morphed into a term of endearment. To others, the word remains a smoking gun.

Pace’s defensive back and junior criminal justice major Kyle Oltman chooses to stay away from the term, which he considers a “racial word”. The “N-Word” yields a perplexing situation when used interracially.

“It’s almost, kind of a rule that a person of color can call another person of color [the “N-Word”] but a white person says it and it flips and becomes negative,” Harris said. “It’s a very confusing game being played.”

As if it were a psychological coping mechanism, African Americans seem to have spun the racial slur into something more palpable. Just as African Americans were once ridiculed for stereotypical character traits, such attributes have morphed into fashion statements; main stream means of self-expression. Take afros, for example, which have revolutionized from an au natural style amongst African Americans to a vogue of the disco era. So too, the “N-Word” has followed a very similar process.

“The word is used as a means of expression and acceptance among certain groups,” Harris said. “Divide that by education and history and the quotient is what leaves certain people unclear of rules of the word, others in full acceptance and others feel that it’s off limits.”

However, Pace linebacker, Ken Aboasu, feels that the new rule will put African Americans at a disadvantage due to its commonplace use in some social circles.

“There is no control over what athletes say on the field,” junior accounting major Aboasu said. “[Black athletes] shouldn’t be penalized for saying a word that’s not insulting to anyone else but himself.”

Although Aboasu was raised in an environment where mention of the “N-Word” was appropriate, not everyone deems it to be fair game. As of late, conflict of interest has come about in sports regarding the word’s subjective meaning.

“People see the word in a different light,” said Pace offensive line coach Darnell Stapleton, who appeared in 14 games [12 starts] for the Pittsburgh Steelers in 2008. “It’s all about perception.”

Often times, the same players being trash talked on the field are warming up to songs in which 60 percent of the lyrics contain the “N-Word” itself. The word carries an apparent double standard as it is wrought between harassment and leisure.

“An athlete was once playing a song containing the word in the locker room,” said Harris “and when I confronted him it was apparent that he did not even realize the potential controversy at hand.”

Policing language places more responsibility on athletic officials as their liability has expanded from athletic rulings to moral ones as well. Being that the consequences of words are not necessarily tangible or immediate, the implementation of the NFL’s 15-yard penalty is aimed at bringing the severity of the matter to the forefront of the athletes’ minds, as opposed to principal penalization.

“What’s happening here is an examination of consciousness,” Harris said. “People are being held accountable for what they say and all we are asking is that [athletes] remain aware of the negative meaning of the words that they use on the field.”

Language filters fade in moments of intense emotion. As in sports when the brain is focusing on getting the ball swiftly across the playing grounds, quick disruption can cause for subconscious words to arise.

“The players in the NFL are professionals,” Stapleton said. “They are better at managing their language on the field.”

The issue at hand is whether or not a rule being considered in the NFL should transcend the league and be applied at the collegiate level.

The National Collegiate Athletic Association (NCAA) has various implications depending on the sport. In soccer, profanity is a yellow card and if player directed, it is a red card. In lacrosse, cursing is an automatic penalty.

Pace’s athletic department uses a social media monitoring tool called Fieldhouse Media, which detects any profanity on the accounts of the Pace athletes.

“You have to have a standard,” Associate Athletic Director and Head Women’s Soccer Coach Mike Winn said. “Rules are good because there is so much information out there and everything you do is public.”

Paces Athletics monitors its players’ social media accounts in the name of education. By tracking language and content, coaches and officials seek to prevent athletes from making detrimental mistakes that in the long run may jeopardize their careers. The purpose of Fieldhouse Media is to ensure that Pace athletes are aware of the ramifications that come with offensive public disclosure. Although there are no consequences for the athletes, the department feels that Fieldhouse Media will help to protect the overall image of the players and the league.

Seemingly, Pace athletes are in agreement with the athletics department that offensive language and racial slurs have no place in athletic competition, despite varying subjective implications.

“[‘The N-Word’] is unprofessional and shouldn’t be used in sports,” senior global marketing management major and member of the Pace Basketball team Denzel Primus-Devonish said. “It’s the wrong way to get into opponents heads.”

“There is no room for tolerance in any game for racial, ethnic or any type of slurs,” Cornetta said. “Whether it’s meant to be serious or as a joke it’s just not necessary.”

In spite of modern interpretations of the “N-Word”, athletes and students are being further educated on its contextual implications. In 2014, people are still trying to understand where we are with the word. As for Pace and the NCAA, it is a whole different playing field.

“If the rule is going to be implemented in the NFL then they should have it in college too to prepare [athletes] for the next level,” Stapleton said. “But we’ll see what happens.”