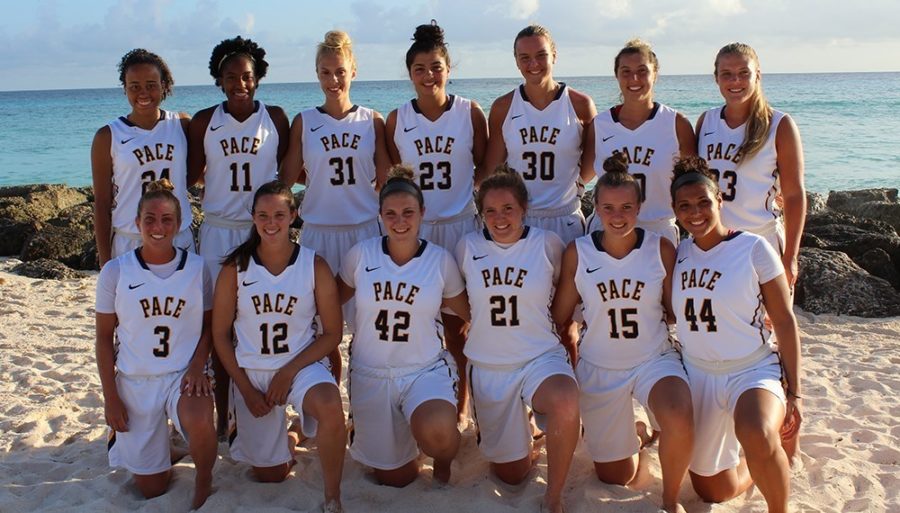 Pace Women's Basketball Team during their trip to Barbados. Photo Courtesy of Pace U Athletics

Pace University’s women’s basketball has been knocking on the door of success since 2012 and is hoping to kick the door wide open this year.

The team’s schedule was released on Oct. 5. However, there are tough challenges throughout the year for the Setters as the team looks to improve from its 14-15 record in 2016.

“The competition has always been tough, but I think it’s going to be more parody this year,” head coach Carrie Seymour assessed. “With more parody, that means every game is going to be that much tougher.”

Pace Women’s Basketball has been under the helm of Coach Seymour for 26 years and the team has changed its identity multiple times. Over the past few seasons, the Setters have played big with taller players on the court. This year, Coach Seymour is switching up the scheme.

In addition, Seymour is not concerned about the possibility of returning players having difficulty adjusting to the system.

“For the kids we have coming back from last year, this is much more suited to their strengths,” she said. “Everyone shoots and passes the ball well, so it won’t be hard to get used to.”

Before the 2012 season, 20-plus wins and a playoff berth was a common occurrence for Pace Women’s Basketball. Since then, the team has had disappointing seasons relative to its past success, with the 2016 team being the first to make it to the postseason for the first time in four years.

Coach Seymour says one of the key issues over the past few seasons has been the impact of injuries on the team.

Two players coming from injuries are guards Gabriella Rubin and Geena Rosalbo. Rubin and Rosalbo are the lone seniors on the team and Seymour says they are not only coming back strong from their injuries, but they have also taken on major leadership roles essential for the success of the 2017 team.

“I think [Rubin and Rosalbo] have done a great job stepping up and being leaders, and right now they’re our hardest workers too,” Seymour said. “That’s big because that is something we can’t coach or teach, but they have still been able to do it.”

Coach Seymour said she expects the team to surpass their 14 wins from last season.

Pace Women’s Basketball will open the season on Nov. 11 against NYIT in the ECC/NE-10 Challenge.