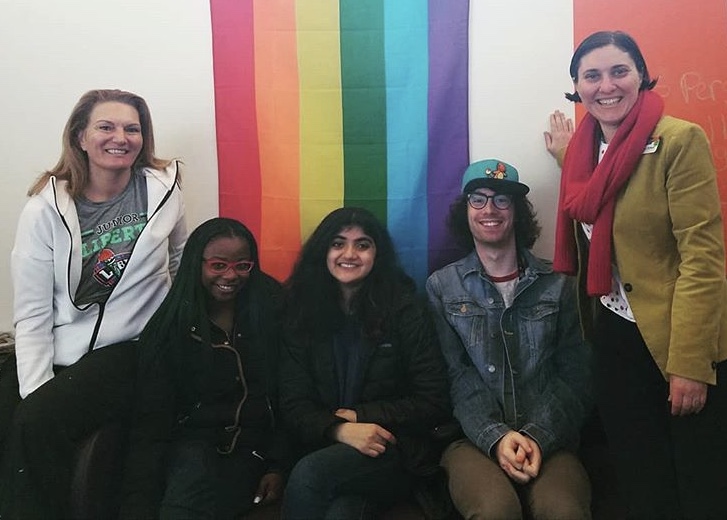 The former New York Liberty All-Star quickly proved she did not visit Pace just to discuss her athletic success and accolades–which includes holding the Rutgers all-time record for points scored–but instead to listen to members of the Pace community, and give the best advice she could provide.

Wicks, who is openly gay, arrived at the LGBTQA Center to ask students about their majors, what challenges they are facing, and what resources Pace provides for its LGBTQA students.

She discussed visiting a LGBTQA club for the first time as a freshman at Rutgers during the 1980’s.

“I went into the meeting as if it was some criminal activity,” she said. “I just remember feeling uncomfortable but also wanting to explore. Walking into the room was a declaration to myself, and maybe it was not my family that I found there, but it was an existence of folks like me.”

Wicks came out as lesbian in 2000 after being asked about her sexual orientation by a journalist from Time Out Magazine.

She developed enough self-esteem and confidence at that stage of her life to answer honestly and thus, becoming the first openly gay WNBA player.

Since her retirement, she has traveled through schools to discuss social issues, life after athletics, and LGBTQA topics. She gave advice to any Pace student-athlete who may fear coming out to themselves, their team or family.

“My advice is do everything at your own pace,” she said. “Come out to yourself and be comfortable with yourself. There is no time or lease to do it. The thing with athletes is you’re so used to being everyone’s favorites, everyone’s high achiever, the class favorite and everything you do is considered wonderful. There is the added pressure that you’re going to let down not only the people that know you, but the people that think they know you and who see you as an image of something.”

Wicks says she attempted to maintain focused on Liberty and the WNBA season after coming out, but she was not opposed to discussing her sexual orientation and LGBTQA rights.

She said athletes should not fear committing some time to activism and addressing social injustice while upholding obligations to the team.

“There are so many things people get involved with now and social justice can be seen as a distraction or as a voice when you have a platform and you use it,” she said. “I think there is more space and respect for that now. All teammates want you to focus on the team, but you can’t ignore what’s going on in society.”

After spending time in the LGBTQA center, Wicks made her way to the Paton House–home of Career Services–to speak with student-athletes, faculty and staff about chasing their passion.

“Finding that thing in life you are passionate about is magical and it is okay if that thing you love may be a grind for you,” she said. “There will be obstacles, but if you love it, you can get through it. So for athletes, if there are coaches that are on always on your case, the love for that sport will keep pushing you through.”

An important message she expressed is not forfeiting when one’s passion is considered outside the ordinary or irrelevant.

Wicks recalls reading a newspaper in high school and noticing Rutgers’ win in the NCAA Women’s basketball tournament having just a tiny headline in the paper.

However, she chased her dreams and chose to go to Rutgers despite the lack of respect the program received, and aimed to play professional basketball despite the WNBA not existing yet.

“I dreamed from when I was a little girl to play professional basketball and it didn’t exist, but I kept dreaming it and I truly believe if you want to do something and you work towards it with passion, it will create itself for you,” she said. “Follow that passion and dream. We all should know we’re unique and we’re not taking a job for a 401k or a paycheck. I do not know if me playing basketball was unique and beautiful to everyone, but it was to me.”

The Long Island native said she was just as thrilled playing in high school as she was playing professionally because she was following her dreams at both levels.

“The Junior varsity experience for me was just as important as playing in Madison Square Garden in front of 20,000 people,” she said. “Receiving that little headline saying you don’t exist, does not matter when you know it’s magical and as big as anything because you’re doing what you love to do. Follow your hearts, do not be afraid.”

Wicks’ advice resonated with many who listened, including Pace basketball player and junior Paton Gibbs.

“What she said that really stood out to me is how athletics translates to real life situations,” he said. “It is always a grind no matter what you’re doing. I think that really relates to me because sometimes running and practicing can be difficult but it’s worth it for something that you love. You just have to push through. She was also right that there are times you need to stop because if you get too caught up, it’s unhealthy for you. So I think she is a really good example of having a balance between athletics and real life.”