Kickbox with Joann: Feel the Burn and Want to Return 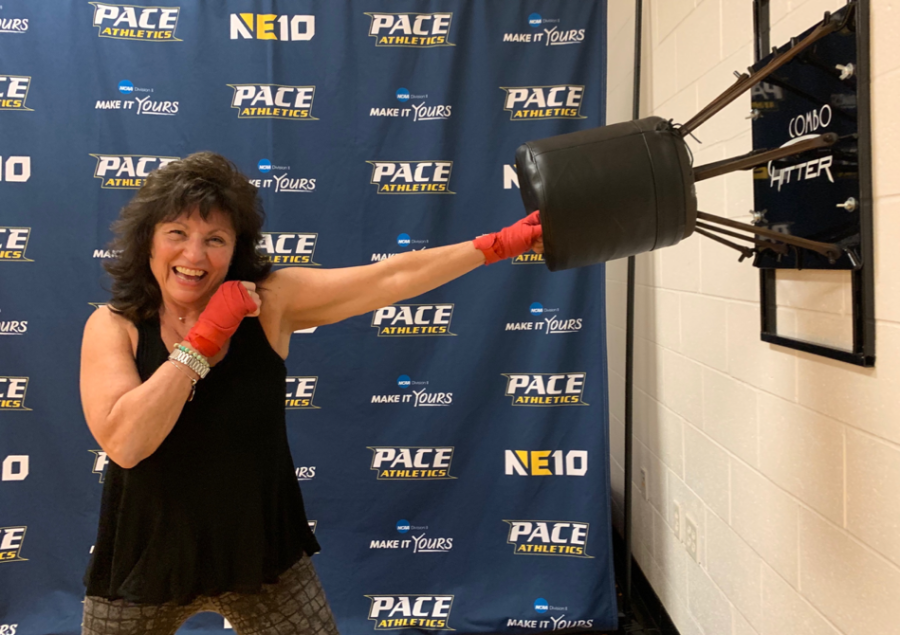 Swing by room 233 in Goldstien Fitness Center Tuesdays-Thursdays to take part in free aerobics classes ranging from Zumba to Yoga.

For the past decade, spunky and smiling Joann Hamilton has taught Zumba, Toning, and Kickboxing classes in the Goldstein Fitness Center. On Tuesday and Thursday evenings, offers classes to people of all ages, from Pleasantville residents to Pace students.

After a diagnosis of high blood pressure and being over-weight, Hamilton had to come to terms with her fitness activity.

“I started running, but I was bored to death,” said Hamilton, who’s in her early 60’s. “Everyone was telling me to try kickboxing, but I wasn’t interested in trying to do classes. Until I did my first kickboxing class, and then that was it.”

The Queens native found such adoration for kickboxing that she decided to get certified to teach it, and now, spends her afternoons teaching at Pace and three other local fitness centers.

“I create, I take a lot of different classes while I’m not teaching, and I mix some stuff from here, some from there,” Hamilton said. “I also go on YouTube to learn things. I constantly train, I’m constantly looking to see what’s out there. I try to bring something fresh to everything I do here.”

Hamilton’s classes held at Pace have a bit of a cult following, including a handful of Pace students and some older residents. They have lived through the post-kickboxing soreness, but Hamilton’s positive attitude always has them coming back.

Leanne Wisner, a freshman at Pace, attends each class that Hamilton offers every week.

“A friend told me about the classes,” said Wisner. “It’s a fun way to get some exercise, and it’s a change of pace from just going to the gym.”

Even so, Hamilton’s positivity and encouragement is a big reason for Wisner’s dedication to attend these classes.

“Joann is super friendly and upbeat,” Wisner said. “She really encourages everyone to push themselves.”

When Hamilton is not teaching or taking fitness classes, she works as a secretary to a principal at a local elementary school. She also loves to cook and bake.

“I was in catering for 17 years, so I like to bring nutrition and cooking together,” stated Hamilton. “I also do some catering on the side. That’s one of my loves.”

Because of her prior health conditions, Hamilton understands how hard it can be to find a new fitness routine and dedicate yourself to it. For this reason, she admires anyone who comes to her classes, even if it is just once.

“About two weeks ago, I came into class and there was an elderly gentleman here, and I thought I was being evaluated,” said Hamilton. “He came over and he mumbled and asked if these classes were open to just the students, but I assured him they were open to everybody. He did the entire class. I was shocked, kind of amazed, but he said he’d be coming back. I haven’t seen him since but that’s okay. He was great, he kept moving.”

Kick-boxing is the workout that ultimately changed Hamilton’s life for the better, which is why she believes in it whole-heartedly.

“It can change your body, and it can change your mind,” she said. “It got me in shape, it helped my health, it gets the adrenaline going, and I love teaching it and bringing it to other people.”

“I love working at Pace, I love teaching you guys at Pace. Spread the word and come on out.”